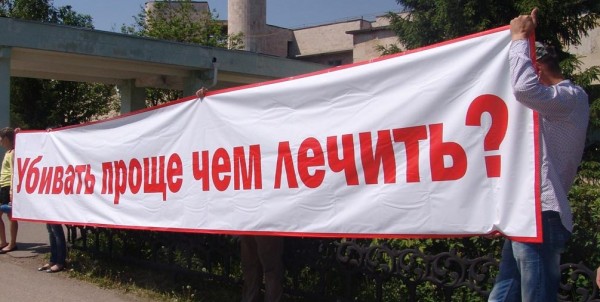 Between June and August 2014, the Patients in Control initiative, a grassroots movement centered on treatment advocacy in Russia, received nearly 25 private appeals from patients regarding the unexpected replacement of their treatment regimens.
These appeals came from ten regions across the nation, including Ivanovo, Tatarstan, Kaliningrad, Krasnoyarsk, Murmansk, Moscow, Nizhny Novgorod, Perm, Rostov-on-Don and Leningrad. Based on these patient appeals, more than 30 official complaints for violation of Russian Federal law №38 were submitted to the regional state health agencies and to the prosecuting authorities of subjects of the Russian Federation. Complaints were also sent to the Ministry of Health, the Federal Service on Surveillance in Health Care and the Federal Service for Supervision of Consumer Rights Protection and Human Welfare of the Russian Federation for each region.
In Murmansk, activists of the movement initiated the prosecutor’s inspection, which revealed violations in the provision of treatment for HIV-infected patients. Additional activities helped establish open communication with the chief of the local AIDS center.
In Nizhny Novgorod, activists of the movement initiated a roundtable discussion on the issues of access to ARVs and HIV prevention in the region. Regional government officials and activists of patient organizations participated in the discussion. The outcome of the meeting was the decision to study the mechanism for eliminating these problems at different levels. Additional advocacy activities resulted in the early delivery of ARVs in the region following the prosecutor’s inspection.
In the Tatarstan region, requests to the Ministry of Health of the Republic of Tatarstan and the President of Tatarstan were submitted. According to the monitoring of procurement of ARVs, auctions in the region were announced nearly two months later than in 2013, which is likely the cause of ARV availability issues in the region. In response to this issue, activists, with technical support from ITPCru, organized a meeting with patients. The resulting advocacy activities helped ensure early delivery of ARVs in the region. A videos of these efforts can be viewed here .
In the Perm region, one activist conducted a protest at the regional Ministry of Health to bring attention to the availability of essential drugs in the region that has arisen due to the late announcement of electronic auctions. The protest resulted in a meeting of the Public Council, where solutions to the ARV stockouts were identified. It was decided that in October 2014, the AIDS Center will start to form the ARV drug request for 2015 and align it with the local Ministry of Health. Accordingly, in January 2015, the Center will prepare auction documentation for the timely announcement of trades. Furthermore, a total of 10 million rubles from the 2014 regional budget will be allocated for the purchase of ARV drugs.
As a result of the advocacy work conducted by activists of the Patients in Control initiative, with technical support from ITPCru, an extensive investigation was conducted on the availability of ARVs, delays in electronic auctions and patient complaints. These investigations were initiated at the request of the Ministry of Health and the Federal Service on Surveillance in Health Care in all regions of Russia.
While these achievements have already improved the state of treatment access in many regions, work in this area of treatment advocacy remains critical, as the Patients in Control initiative continues to receive new appeals.
Stay tuned for an update from this initiative in the coming months!