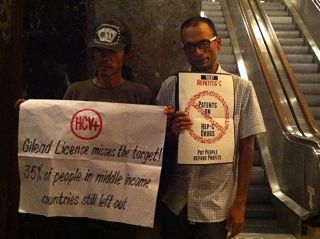 We knew it wasn’t going to be easy to protest at the recent Gilead Press Conference in New Delhi, held on 15th September 2014. The press conference was in a posh, five-star hotel. So we thought we’d do a silent protest, to get our message across to Gilead, Indian pharmaceutical companies and the local press that Gilead’s refusal to allow generic versions of the drug Solvadi (which can cure Hepatitis C) in some countries is unacceptable.
We were a group of local activists, from across organizations in India, numbering about 10 people. When we arrived at the hotel, we found the press conference room and set-up the protest at the entrance. We pulled out a large banner, and sat down at the main entrance gate. We did not shout or make noise – we just stood there in our HIV Positive t-shirts with our posters. After about 30 minutes, the security men said, ‘that’s enough’ and told us to take down our banner and leave. We politely refused. Suddenly, I saw two of my colleagues from the Delhi Network of Positive People (DNP+) being manhandled by security as they attempted to drag them out of the room.
I didn’t think this was right, so I ran towards them and wrapped my body around them, locking our hands and feet together and forming a kind of human chain. Now the security men tried to pull us out of the room one by one, but we were too strong to break apart. They called for more men, and gradually because they greatly outnumbered us started lifting us off the floor. I had been silent, but now I began to yell, ‘Why are you doing this? We are here fighting for our lives.’
As I was yelling, about five men descended upon me and yanked me out of the room by my hair. They threw me on the ground outside of the exit gate. I was stunned, and angry. I found out later that someone from the press conference barred journalists from taking photographs or shooting videos of the protestors outside the venue.
Looking back, despite the physical harm, I’m still proud that we pulled off the protest. At the Delhi Network of Positive People (DNP+) and ITPC South Asia, we don’t use protests as the first option for conveying our message. But if repeated letters and meetings have no effect – as is the result with Gilead, who refuses to engage with us – then we have to take our campaign public. We show up for a protest because we have no other options.
But despite Gilead’s attempts to cover up our protests, we are not going anywhere. The HIV treatment movement cannot ignore Hepatitis C; we have seen more and more people diagnosed with the disease among our friends. We have watched them suffer or die because they cannot afford the cost of treatment. Now that there is a cure for Hepatitis C on the market, we have even more incentive to fight to access it – otherwise all of our hard work and investment in HIV treatment will be in vain.