The International Treatment Preparedness Coalition (ITPC) supports the patent pre-grant opposition that was filed on 13 April 2015 by the Fundación Grupo Efecto Positivo (FGEP) and the Argentinian Network of Positive People (Redar Positive). The patent was filed at Argentina’s patent office and challenges the validity of a patent application submitted by Gilead Sciences on the anti-HIV combination of tenofovir (TDF) + emtricitabine (FTC).
Known under its trademark name as Truvada®, this medicine is listed by World Health Organization (WHO) among preferred antiretrovirals for treatment of HIV infection. Truvada® is recommended as a key drug to prevent HIV transmission among key populations who are at higher risk of infection. Although the drug is widely available at an affordable price in several developing countries, it is marketed in Argentina at an excessively high price. The price of Truvada® in Argentina is US$2,304 per person, per year even though generic versions of the combination are available on the market, including in other similar middle-income countries, for approximately US$70 per person, per year . Every year, Argentina spends over US$12 million on this drug alone. This constitutes 23% of the entire National AIDS Program annual budget and provides enormous profits to Gilead who charges the country a price 30 times higher than lowest generic price.
Patent opposition is a process that allows third parties like civil society or generic competitors to challenge the validity of a patent based on patentability criteria. “We are asking the patent office to reject Gilead’s application for tenofovir + emtricitabine (TDF+FTC) because this combination does not meet the patentability requirements set out in Article 4 of Argentina’s Patent Act”, said Lorena Di Giano, Executive Director of Fundacion Grupo Efecto Positivo (FGEP). “This Act grants patents provided that they are novel, involve inventive activity and have an industrial application. Truvada® is the combination of two known drugs TDF and FTC that are already in the public domain and do not constitute an invention or an innovation. This patent should simply be rejected. There is no reason Argentina spends taxpayer’s money quenching Gilead’s thirst for scandalously huge profits.”
ITPC’s Executive Director, Christine Stegling explained, “the delay in resolving this abusive patent application has discouraged generic manufacturers from entering the Argentina market. Rejecting Gilead’s application would open the door to generic competition and could result in annual savings of nearly US$11.4 million. This patent opposition is the first of a series of patent interventions ITPC and the Initiative for Medicines, Access, & Knowledge (I-MAK) are carrying-out in partnership with our in-country partners in four key middle-income countries (Argentina, Brazil, Thailand and Ukraine). Our interventions aim to protect access to HIV treatment and ensure production of affordable generics by challenging unmerited patents and removing intellectual property barriers”. 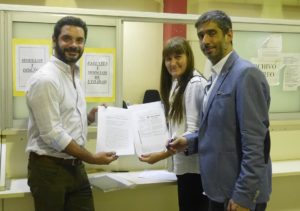 About the Organizations:
The International Treatment Preparedness Coalition (ITPC) is a global movement of people living with HIV, treatment activists and their supporters dedicated to treatment access for all in need. For more information visit the website www.itpcglobal.org
Fundacion Grupo Efectivo Positivo (FGEP) is an Argentinian non governmental organization that promotes HIV treatment access through political/social engagement and policy dialogue on ARV patents, working with broad network of government and civil society partners.
ITPC is leading a consortium of civil society organizations funded by UNITAID to address barriers to treatment access in four middle-income countries including Argentina.