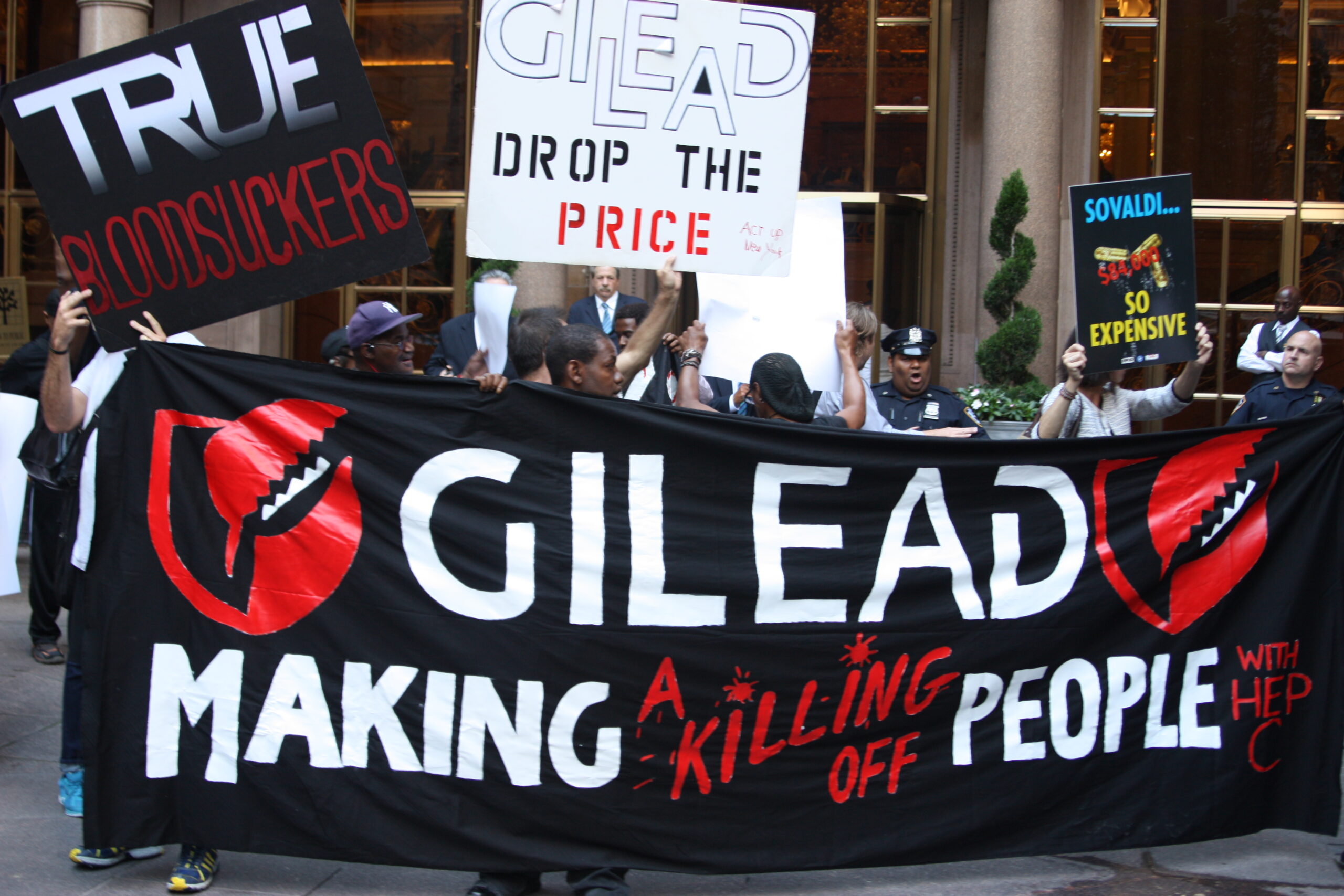 New York, May 5, 2015 — On the eve of pharmaceutical company Gilead Sciences’ annual shareholder meeting, thousands of people who have hepatitis C virus (HCV) and HCV/HIV coinfection, with their allies and physicians, have demanded that Gilead change its policies that deny access to treatment for millions of people in developing countries.
“Gilead must immediately stop blocking access to affordable generic hepatitis C treatment—and abolish egregious ‘anti-diversion’ measures that violate patient rights,” said Othman Mellouk of the International Treatment Preparedness Coalition.
Hepatitis C is a global public health crisis—called a “viral time bomb” by the World Health Organization— with at least 150 million people living with the disease. Untreated hepatitis C can progress to cirrhosis, liver failure, and liver cancer. Every year, at least 700,000 people die from these complications—although HCV can be easily cured with just 12 weeks of oral direct-acting antiviral (DAA) drugs. But most people don’t have access to the DAAs sofosbuvir (Sovaldi) and the sofosbuvir/ledipasvir combination (Harvoni) because Gilead prices them exorbitantly, and many developing countries are excluded from Gilead’s treatment expansion plans.
Sofosbuvir, priced in the United States at $84,000 per 12-week treatment course, is unaffordable even for high-income countries. Meanwhile, research from Liverpool University shows that the 12-week course can be mass-produced for just US$101.
Gilead has signed licensing agreements with 11 Indian generics producers imposing geographic limits on where affordable HCV medicines can be sold, instead of creating access to generic versions of these drugs. While the HCV pandemic is overwhelmingly concentrated in “middle-income countries”—where most of the world’s poorest people live on less than US$1.50 per day—Gilead sees these countries as profitable markets and has no plans to sell affordable generic treatment in 51 middle-income countries, home to 49 million people with HCV.
“While Gilead is reaping record profits on its HCV drugs (US$12.4 billion in 2014), it refuses to provide affordable, lifesaving treatment to a staggering 49 million people,” said Karyn Kaplan of Treatment Action Group.
It is widely acknowledged that unrestricted generic competition is the most effective strategy for reducing the price of medicines. However, Gilead’s voluntary licenses restrict raw materials for the drugs, dictate where these lifesaving drugs can be sold, and impose barriers to access for patients—all to protect its profits.
“Gilead could be taking steps right now to advance public health and allow millions of people to be cured of this disease,” said Dr. Jennifer Cohn, medical director of Doctors Without Borders/Médecins Sans Frontières Access Campaign. “Instead, it has inflated drug prices and created additional barriers to treatment scale-up—at the cost of people’s lives.”
Further, Gilead requires its licensees to institute so-called anti-diversion measures. Patients must prove citizenship, provide their medical records, and agree to be tracked—and return empty pill bottles in person on a biweekly or monthly basis, in some cases having to provide viral suppression information to be eligible for the next bottle. These and other measures violate patient confidentiality and autonomy, interfere with doctor-patient and pharmacistpatient relationships, and may compromise adherence and treatment outcomes. Gilead’s program, with commercial interest as the sole motivating factor, is without precedent.
“Just as Gilead has said it will strongly defend its intellectual property rights, we will strongly defend the human rights of those who need access to these drugs,” said Vikas Ahuja, president of the Delhi Network of Positive People (DNP+).
A petition presented to Gilead today stated:
“We, over 3,000 people with HCV and our physicians and allies, urge Gilead to immediately remedy the terms of these licenses and support affordable access, by: