Bruce Tushabe reports below on how he mobilized Civil Society Organizations (CSOs) to successfully lobby for greater engagement with the Global Fund. These efforts led to a 10 fold increase in funds for CSOs to scale up the community led HIV response in Malawi. Bruce works for Malawi Network of Religious Leaders Living with or Personally Affected by HIV/AIDS (MANERELA+) the organization at the heart of this story.

We were being left out 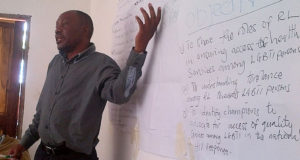 We at MANERELA+ wanted to ensure that the experience and expertise of Civil Society Organizations (CSOs) was included in the Global Fund national plans in Malawi. Through our Executive Director, McDonald Sembereka, we were involved in the Global Fund concept note development consultations. This process hadn’t worked for CSOs in the past, and there was no sign it was going to change in the future. We could see we need to get more involved. In February 2015, Macdonald and I realized that the Principal Recipient had a huge amount of influence in budgeting and costing of the plans, and that we were being left out. The Principal Recipient for the Global Fund grant in Malawi was the Ministry of Health (MoH). Most of the activities proposed by the technocrats at the MoH were around bio medicals with little consideration for the role of communities, and of Community System Strengthening. We were keen to change that.

We got ourselves organized

The Ministry of Health was organized, but we CSOs were not. So we at MANERELA+ spearheaded the organization of several side meetings with eight CSOs where we could discuss our concerns freely. In February and March 2015, we organized four meetings over the period of a month. Together we developed a collective plan to ensure we spoke with one voice, to influence the development of the national plans.

We lobbied for a different Principal Recipient 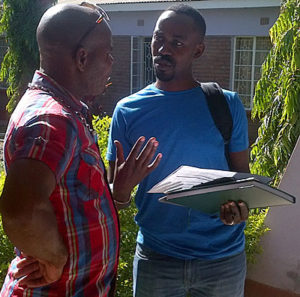 As a collective, we actively lobbied the Global Fund to appoint a different Principal Recipient, who at that time was the National AIDS Commission and the Ministry of Health (MoH). On this issue we had our first success.
Prior to this, there had been some audit queries about the National AIDS Commission, and as a result Malawi was downgraded to ‘B2’ which means, ‘inadequate, but some potential is demonstrated’. So there was an appetite for change. We lobbied the Country Coordinating Mechanism through people living with HIV (PLHIV), youth and key population representatives to lobby the Global Fund. We used established mechanisms like our quarterly meetings with other CSOs and PLHIV networks to discuss and agree our strategy. When we met with the Global Fund mission we continued to build our case.
We succeeded! The Principal Recipient role is now divided along thematic lines between ActionAid who leads on HIV, World Vision who leads on malaria, and the MoH who leads on TB. The MoH continues to provide technical expertise across these areas.

We requested better engagement with the Global Fund

Even when we met with the Global Fund we felt disadvantaged. They would meet us first when on mission to Malawi, before meeting other partners. So we had no opportunity to challenge or counter what the government was saying. We raised this with the Global Fund and secured a slot alongside INGOs, such as ActionAid, during the latter part of Global Fund visits. So we still had our early meetings, but now could also meet them toward the end of their mission. This gave us an opportunity to engage fully with the management of the Global Fund grant, and address the mistakes of the past. One thing we were really keen to do was avoid duplication and ensure all actors in the response work together and that our roles complement each other.

We got stuck into budget and accountability

We at MANERELA+ took it on ourselves to facilitate sharing the budget amongst CSOs enabling them to understand the implications of the MoH costings. Previously it had been difficult for any of us to interpret the budget. After training provided by International Treatment Preparedness Coalition and AIDS & Rights Alliance in Southern Africa, as part of a project funded by Robert Carr, we were able to understand the MoH budget, and better able to advocate for the changes needed.
Most of the budget in Global Fund was allocated to bio medicals and procurement of equipment. Hardly any budget had been assigned to community system strengthening. CSO activities weren’t costed adequately, and important elements of our activities were missed out altogether. We decided we needed to fight for space at the table to challenge the budget.
MANERELA+ participated together with other local NGOs like Malawi DREAM, Malawi Network of AIDS Service Organisations, Development Aid from People to People, Centre for the Development of People, and others. Better engagement with these CSOs strengthened our position in our efforts to challenge the budgets being presented by the MoH.
MANERELA+ also participated in various workshops, such as the prioritization consultative workshop with AIDS Accountability where CSO’s came up with priorities and thematic areas to be funded by Global Fund.

We contributed to the Global Fund concept note

Having secured a place at the table we were able to fully engage in the planning and development of the concept note. During these meetings we had also spotted that there was no integration between HIV, Malaria and TB. The Global Fund team asked how CSOs could help ActionAid to scale up TB interventions. We shared MANERELA+ success models working with communities on TB and questioned some of the plans that were inadequately funded. The Global Fund made it clear to ActionAid that if partners already had expertise and were already involved in such activities, like MANERELA+, that they should involve them as implementing partners. ActionAid had already called for a meeting with CSOs to engage them in the in concept note development.

What did we achieve?

Our participation in individual consultative meetings, and in budgeting and costing consultations resulted in increasing the Global Fund allocation to CSOs for community system strengthening from below US$1 million previously to over US$10 million.
Overall our efforts resulted in an increased award from the Global Fund for Malaria, TB and HIV of over US$332 million, with around US$26 million allocated to civil society for HIV and TB for  Community System Strengthening. The Government of Malawi has now signed the agreement, and committed US$30 million of its domestic resources to the joint plans, and another US$30 for the procurement of health products and to strengthen health systems, with US$8.5 million set aside for antiretroviral therapy. Our participation with other CSO’s has resulted in an allocation of almost US$390,000 for key population interventions.
Our participation also resulted in increased consultation with CSOs in PEPFAR’s country operation plan development processes. The PEPFAR country office in Malawi invited us for consultative meetings where CSO‘s were now represented. We felt that PEPFAR shouldn’t duplicate what was already included under the Global Fund country plan, and not overly focus on bio medicals. We had private meetings with CSOs ahead of the PEPFAR meetings to agree on our position.
For us one of our key achievements was being able to sit down and make specific suggestions and proposals with donors. We felt we were really able to help them maximize value for money, particularly important with today’s shrinking funds.

Please share your experiences with Global Fund processes, in the comments section below.