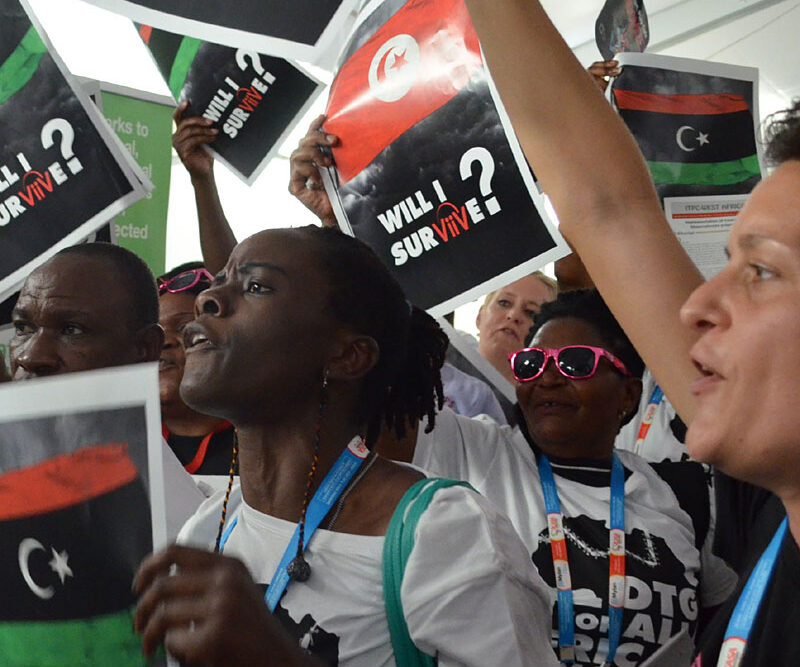 Zakaria Bahtout, the Programs Partners’ Officer at ITPC MENA describes the protest targeting ViiV Healthcare, from the frontline in Harare, Zimbabwe, at an international conference at the end of last year. At ‪the International Conference on Aids and Sexually Transmitted Dieases in Africa 2015, treatment ‪activists ‬‬‬shamed ‪ViiV‬‬‬ Healthcare for preventing Morocco, Algeria, Tunisia‪ from accessing generic versions of ‪dolutegravir.

We Are All Africa

‬‬‬‬‬‬‬‬Protestors chanted the slogan, “We are all Africa”, as the crowd steadily grew with each passing minute. The protest drew the attention of thousands of people participating in the 18th International Conference on AIDS and STIs in Africa (ICASA) in Harare, Zimbabwe recently.
I joined activists from all over Africa to call on the pharmaceutical company to ensure that its HIV medication is accessible and affordable to people living with HIV in North Africa. We demanded to know why the pharmaceutical giant decided to exclude four African countries, including Morocco where I live, from its voluntary license; denying people in those countries the ability to produce or import generic versions of the antiretroviral drug dolutegravir.

Dolutegravir recommended but not available

Newer AIDS drugs and formulations of existing drugs are urgently needed in North Africa, yet they are not available because powerful pharmaceutical companies have decided not to sell them, while preventing access to generic versions of their drugs. The World Health Organization (WHO) presented its new HIV/AIDS treatment guidelines at ICASA, highlighting several essential medicines including dolutegravir which are simply not available in North Africa.
The antiretroviral medicine dolutegravir, marketed by the pharmaceutical firm ViiV Healthcare, as Tivicay, is an integrase inhibitor. Integrase inhibitors prevent HIV genetic code from integrating with the human DNA. Dolutegravir is very effective, has significantly fewer side effects than some older treatments, and high genetic barriers preventing drug resistance in patients. The use of this drug will help improve patient adherence to treatment, and result in suppressed viral loads.
This new drug is critical for people in all African countries, yet it is not available in Morocco, Algeria, Tunisia and Libya. ViiV Healthcare has not revealed any plans to market this new drug in any of these four countries.

ViiV Healthcare, the company that markets the drug, has claimed that the four North African countries have not been excluded from its voluntary license, and that the company has already filed for authorization with health authorities in Algeria, Morocco and Tunisia. The company added that as of now there are no patents for the drug in Libya or Tunisia. However, this is not entirely true because ViiV Healthcare and the Medicine Patent Pool issued a voluntary license on dolutegravir to Indian manufactures in 2014, allowing them to supply 121 developing countries with the generic version of the drug. Almost the whole of Africa was included in the agreement, except for Algeria, Tunisia, Libya, and Morocco.
As a result of this exclusion, the price of the drug will remain a major barrier to access in North Africa. Today in Morocco the cost of the standard first-line therapy for one patient is US$108 per year. However, when a patient experiences significant side effects or develops drug resistance these patients require newer, second-line treatment. It is at this point that the cost of treatment can become prohibitively expensive at US$1,660 per year per patient.
Powerful companies like ViiV Healthcare have the power to change this. Patients whose lives had been saved by first-line treatment will once again be in peril when the day comes that they require second-line drugs. If we don’t gain access to these newer drugs at affordable prices, the result could be catastrophic for people living with HIV in North Africa. This is why it was important to remind the pharmaceutical companies, and the world, that “we are all Africa”.

What next – take action

Following our protest we were contacted by ViiV Healthcare. The company invited us to sit down and express our concerns about their decision to exclude North Africa from its voluntary license. We used the opportunity to demonstrate the effect their decision would have on access to effective treatment for people living with HIV in the region.
The fight is just beginning… In order to stay up-to-date on how we are progressing follow us on ITPC-MENA Facebook page. You can show your support for our campaign by sending us photos of you holding the campaign’s logo with your own personal message.