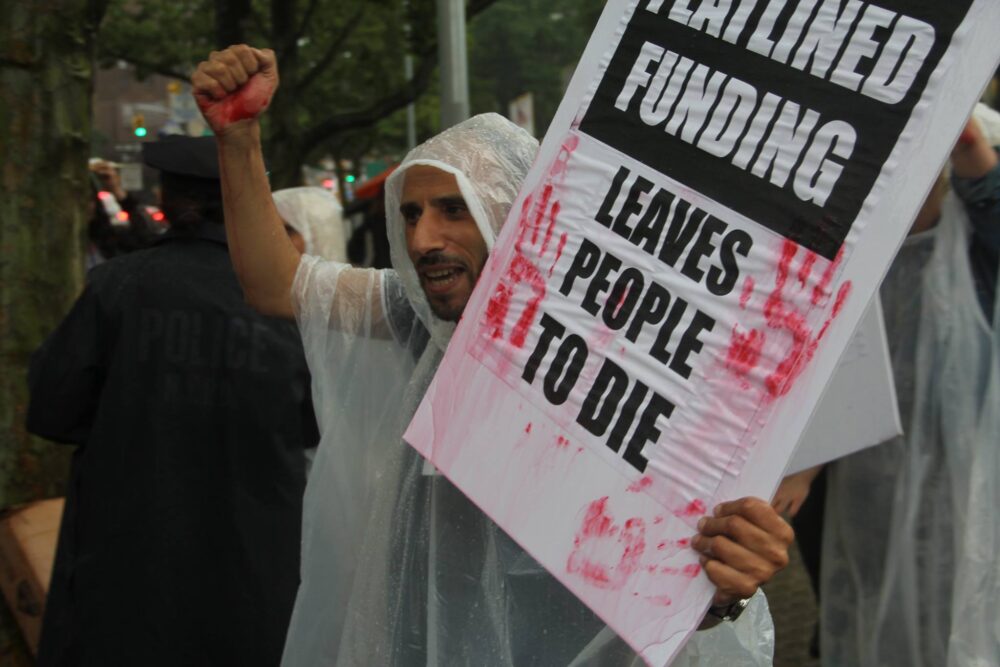 New York, 9 June 2016
The International Treatment Preparedness Coalition (ITPC) is deeply disappointed with the outcome of the Political Declaration “On the Fast-Track to End the AIDS epidemic” adopted yesterday (8 June 2016) by the United Nation (UN) Assembly at the High-Level Meeting (HLM) on Ending AIDS.
Weeks before the meeting, the tone was set by member states when they refused to give accreditation to 22 organizations representing LGBT, sex workers, youth and people who use drugs. The declaration negotiation process has been marked with polarization of member states defending extreme positions based on political, religious and cultural values rather than science and evidence based interventions. The UN decided to use the silence procedure putting forward a draft declaration for member states to take/or leave without any further negotiations, unless a country decided to break the silence. Within the little space given to civil society in the process, AIDS activists lobbied moderate member states to “break the silence” and reopen the negotiations of the political declaration to secure essential progress.

“Sadly, none of the countries we reached out to agreed to break the silence, except Russia who attempted to dilute an already weak declaration,” explained Othoman Mellouk, Access to Medicines Lead for ITPC. “For a brief period this created an opportunity to use the three days of debates and discussions to influence the negotiations and make a strong declaration informed by evidence. When Russia withdrew its concerns the final declaration was adopted during the HLM opening plenary meeting.”

The final version of the political declaration includes new ambitious commitments such as delivering treatment to 30 million people by the year 2020, as well as bold new commitments by all member states to accelerate HIV prevention, treatment, realize human rights and address gender-based violence. However, it also excludes language on the realization of the rights of, and access to programs for, key populations such as men who have sex with men, transgender people, sex workers and people who use drugs.
Frustratingly, after the adoption of the declaration several member states expressed their immediate reservations about specific parts of the text thereby removing all hope for positive interpretation. By saying “I don’t recognize…” countries such as Egypt, Iran, Saudi Arabia, Sudan, Indonesia, Libya, Yemen and the Holy See (a permanent non-member state with observer status) made statements condemning the explicit mention of key populations. Russia and Singapore opposed language on evidence based harm reduction interventions and the United States pushed for strict rules on intellectual property protection.
Together with over 80 civil society organizations, ITPC expresses its profound dissatisfaction with the political declaration in the Global Civil Society Organization Declaration.

“How can you try to ‘end AIDS’ by completely ignoring and refusing to even acknowledge the people most affected by HIV?” asks Solange Baptiste, Executive Director of ITPC. “How do you collectively cement an Intellectual Property system that continues to make medicines unaffordable? We came to the meeting to support countries, and work together to end AIDS. What we saw is opposite of what needs to be done. This takes us back to the beginning of the epidemic! We refuse to be deflated; instead we choose to work collectively to make our governments and the United Nations system accountable to effectively achieve our objective of ending the AIDS epidemic.”

International Treatment Preparedness Coalition (ITPC) is a global coalition of HIV treatment activists formed in 2003 to respond to the needs of communities worldwide. Structured in eight regions, the global network is driven by individual activists, peer support groups, grassroots networks, community-based organizations, and non-governmental organizations.
Each of regions share our values and vision and come together to address issues around access to treatment issues in their countries, regions and at the global level. The Coalition includes organizations and networks run by key populations – lesbian, gay, bisexual, transgender and intersex people, sex workers and people who use drugs – as well as others marginalized within the current HIV response, such as women, girls and migrants. As a Coalition rooted in the Global South, ITPC established its global office in Botswana in early 2015, and opened its new office there in March 2016.