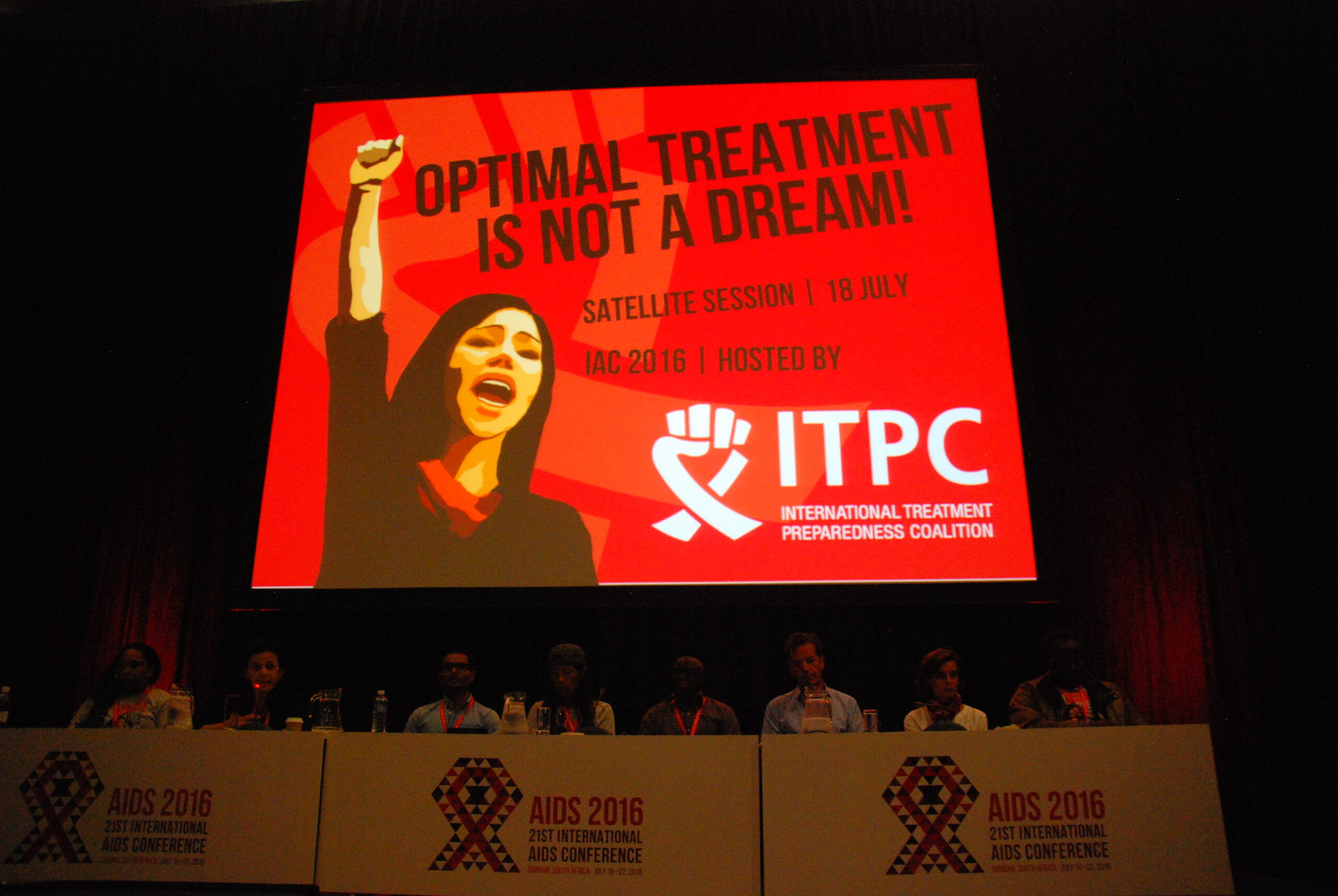 ITPC had one clear message for delegates attending the AIDS conference 2016 in Durban, “Optimal Treatment is not a dream!” ITPC led, co-hosted and participated in sessions to keep this message front and center. On every day of the conference, ITPC had a role hosting or presenting at Satellite Sessions, Skills Building Workshops, leading and supporting protest actions, and leading the Treatment Networking Zone. Some of our activities were in the official conference program, and many were not! Not on the program was an ITPC-led direct action on Gilead’s booth to protest at the high price of Sufosbuvir. ITPC also co-hosted and participated in side sessions with World Health Organization (WHO), Médecins Sans Frontières (MSF) and others.
We are proud to see treatment activists featured so prominently in the IAC AIDS 2016 conference video. See ITPC, Be healthy – Know Your Viral Load, Make Medicines Affordable, and the Treatment Networking Zone highlighted here! 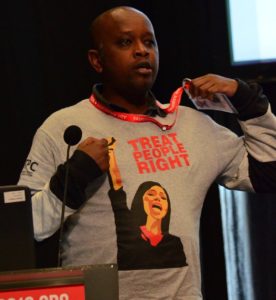 The soundbites most shared on social media from ITPC came from our technical leads, Bactrin Killingo and Othoman Mellouk. Bactrin Killingo, ITPC’s Treatment Education Lead, said simply “I don’t have a PowerPoint. This is my message: Treat People Right!” in his contribution to a session hosted by UNITAID and MSF entitled “Advocacy Tactics: High Level Meetings, Sustainable Development Goals, and Grassroots Activism”.
Othoman Mellouk, ITPC’s Intellectual Property and Access to Medicines Lead, adapted a famous proverb with his statement, “Voluntary licensing is like giving a man a fish so you feed him for a day. Building capacities to use TRIPS flexibilities, is like teaching a man to fish, so you feed him for a lifetime.” Admittedly, you needed to be there, or at least have some grasp of the issues, for that one to work! 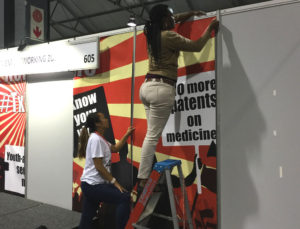 ITPC led a partnership of six organizations (STOP AIDS, TAC, RedLAM, MSF, AVAC Alumni Fellows Group) to provide a vibrant timetable of themed activities on the Treatment Network Zone over the five days. Here is Wame Mosime, ITPC’s Global Director of Programs and Advocacy and Trisa Taro, ITPC’s Program Officer, setting up the Networking Zone at the start of the week. 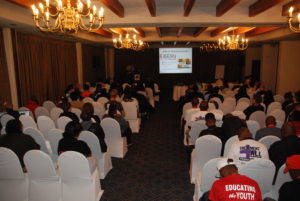 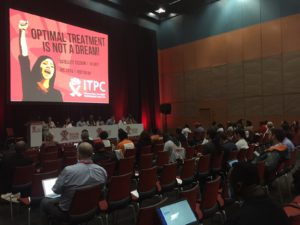 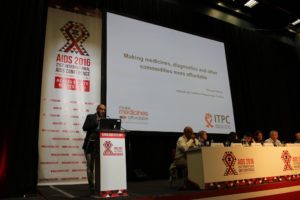 On the same day, ITPC Intellectual Property & Access to Medicines Lead, Othman Mellouk, spoke at the WHO satellite session on financing health and HIV response. This is where we first heard about the man and the fish, and voluntary licensing versus TRIPS flexibilities (see above)!

On Tuesday 19 July, ARASA and ITPC hosted a side event to show case our new film featuring key population activists. The activists share glimpses into their personal lives and highlight what they have achieved in securing national financing for interventions aimed at key populations. Leaders of key population activist groups in Botswana, Malawi and Tanzania shared lessons about how to influence the national debate, ensure meaningful participation, and create a dialogue around concrete next steps and approaches that activists should take to ensure the sustainability of financing key population programming. See the film here. 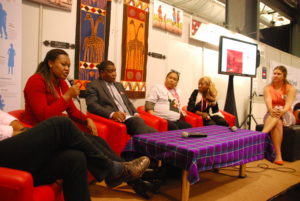 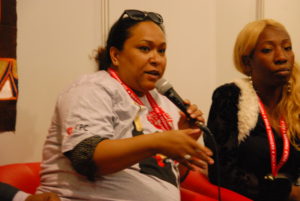 ITPC Executive Director, Solange Baptiste joined Nana Gleeson from BONELA in a panel discussion at the Global Fund Networking Zone in the Global Village, on how communities can engage with Global Fund regional grants. 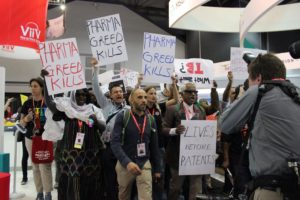 On Wednesday 20 July, ITPC and partners led more than 100 activists in protest against Gilead on the pricing of its drug sofosbuvir. Sofosbuvir, a treatment for hepatitis C, costs $1000 a pill, $84,000 for a 12 week course of treatment, and $100,000 for a combination treatment. Gilead representatives were conveniently absent from the booth at the time. See some footage and more pictures on our facebook page. 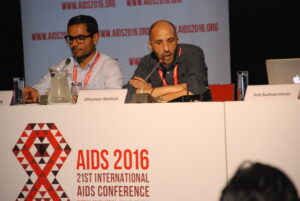 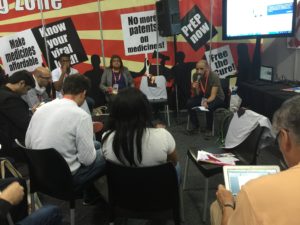 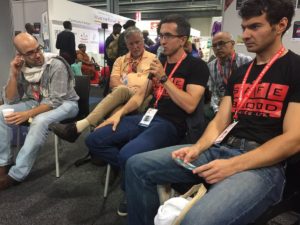 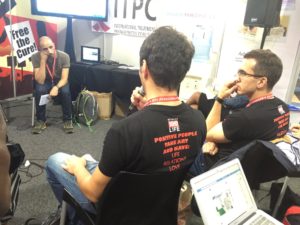 Treatment Networking Zone Throughout the Week

The Treatment Networking Zone was a hive of activity throughout the week with sessions organized by all the main partners: STOP AIDS, TAC, RedLAM, MSF, AVAC Alumni Fellows Group. It was the main meeting point for direct actions and marches, and together we ran themed sessions on Youth, 90-90-90, Treatment Education and Intellectual Property and Access to Medicines. 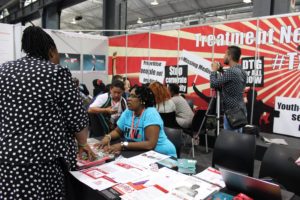 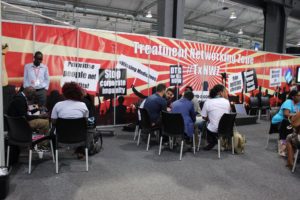