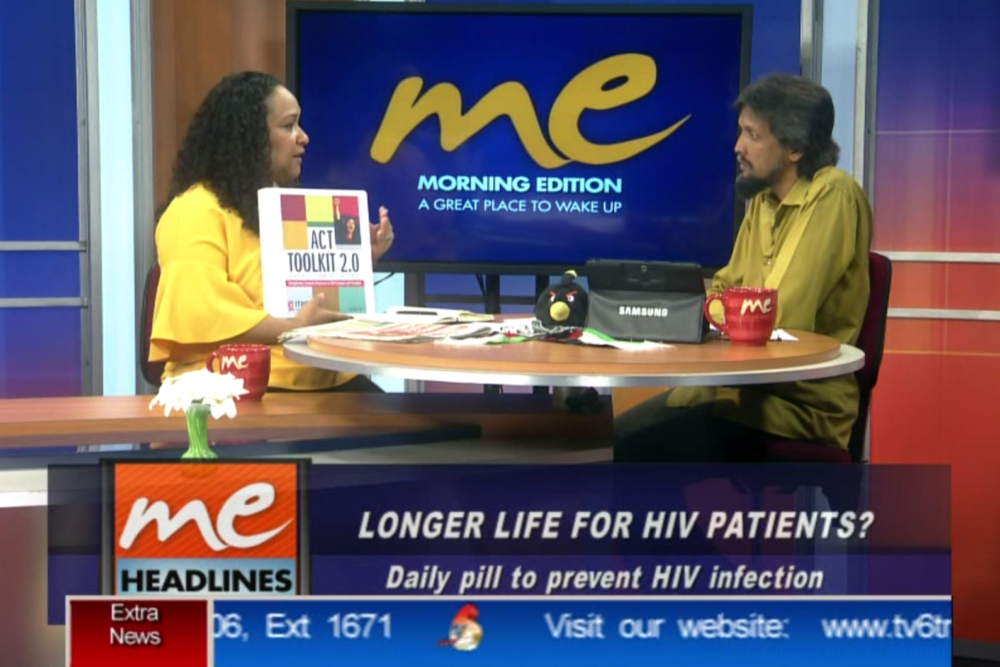 Ahead of ITPC’s Global Think Tank Meeting on PrEP, ITPC Executive Director Solange Baptiste and Director of Global Programs & Advocacy Wame Mosime met with local media to increase awareness about PrEP and speak about ITPC’s work to ensure communities have a voice in processes around it. Information was also shared with media outlets in Port of Spain via a press release, supported by the United States President’s Emergency Plan for AIDS Relief (PEPFAR) through the United States Agency for International Development’s (USAID) project Linkages across the Continuum of HIV Services for Key Populations Affected by HIV (LINKAGES), and the M∙A∙C AIDS Fund.


Here are eight key takeaways – what you should know about preventing HIV:

HIV is the Human Immunodeficiency Virus, which causes HIV infection. Acquired Immune Deficiency Syndrome, or AIDS, is the most advanced stage of HIV infection.

3. Is HIV still a big problem?

There is a perception that HIV is no longer a problem, in part because recent advances in medical treatment have made it possible for people living with HIV to live a long and healthy life.
However, the harsh reality is very different:

In spite of decades of research leading to vast improvements in our knowledge, there is still no cure for HIV. However, HIV is no longer a death sentence. Treatment, through anti-retrovirals or ARVs, keeps the amount of virus in the blood low or suppressed, and people living with HIV who are diagnosed early and treated can have a long and healthy life.

5. Can HIV be prevented?

Because HIV is spread through unsafe contact with bodily fluids, it can be prevented through various methods such as abstinence, correct and consistent use of lubricants and condoms, use of sterile needles and, more recently, medicine.

6. What exactly is PrEP?

PrEP is a new and an additional preventive option for people who are HIV-negative but who are at high risk of infection. For PrEP you take a pill every day by mouth. If exposed to HIV and you are taking PrEP medicines daily, the high concentration of medicine in your blood will prevent infection. When used consistently, PrEP has been shown to reduce the risk of HIV infection among high-risk groups by up to 92 percent.
PrEP stands for Pre-Exposure Prophylaxis:

PrEP is not just about a once-daily pill though; it is a comprehensive program that also includes:

7. What is the medical treatment for HIV?

People living with HIV take different combinations of medicines, called regimens, which control the amount of the virus in their body. A regimen works much like the lifelong treatment for a chronic disease such as diabetes or high blood pressure.

8. How does ITPC help people get access to treatment?

In an ideal world, everyone would have access to HIV testing, get medical treatment if needed, ensure their treatment is working, and have a voice on issues that affect their lives and health. But in reality, low levels of knowledge and other important factors continue to inhibit access to treatment including prevention methods such as the use of PrEP, particularly among marginalized groups such as sex workers, gay, bi-sexual, transgender people, people who use drugs and adolescents. Around the world, many community-based organizations are taking up the challenge to help increase access to PrEP for people who want it.
The International Treatment Preparedness Coalition (ITPC) is a worldwide coalition of people living with HIV and community advocates working to achieve universal access to optimal HIV treatment of those in need. Formed in 2003 by a group of 125 HIV activists from 65 countries at a meeting in Cape Town, South Africa, ITPC actively advocates for treatment access in eight regions across the globe. You can learn more about HIV in our Advocacy for Community Treatment (ACT) Toolkit