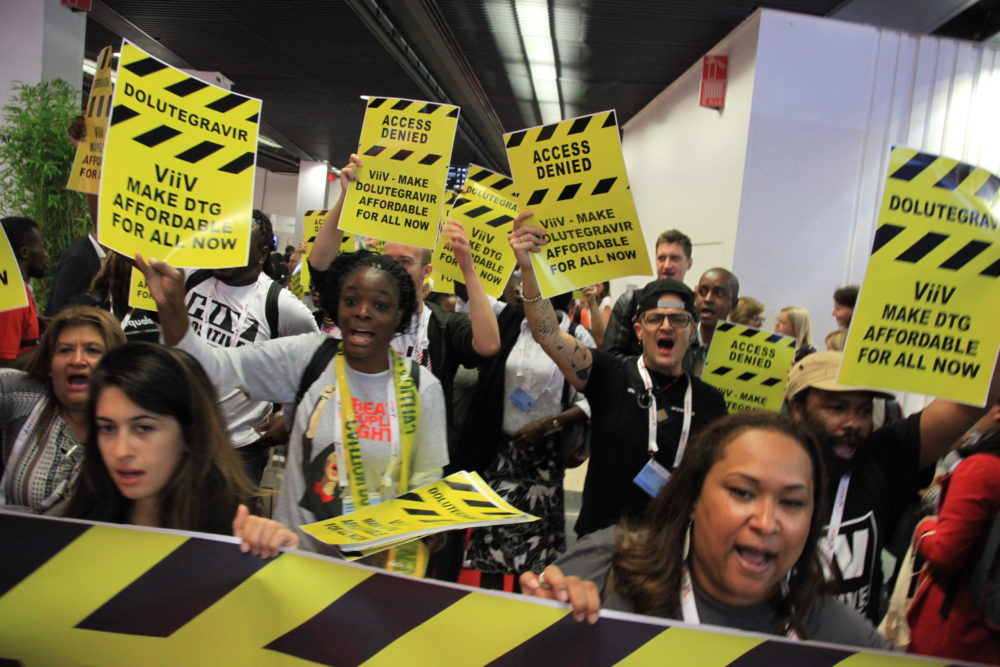 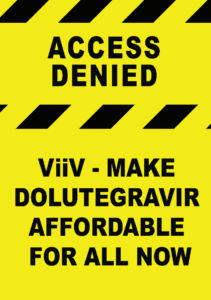 Today, Monday, 24 July 2017, during the 9th International AIDS Conference on HIV Science in Paris (IAS 2017), HIV treatment activists from around the world collectively blocked access to ViiV Healthcare’s promotional booth and stormed its presentation to physicians.
The action, which included taping off ViiV’s booth, to deny access to conference delegates, highlights the company’s access policy in middle-income countries, preventing millions of people from accessing its drug: dolutegravir.
Initially considered for people failing on HIV treatment, dolutegravir is now also recognized as the most optimal drug available today for patients newly initiated on treatment, given its safety, efficacy, and high barrier to resistance.
A recent forecast analysis[1] predicts dolutegravir to become a major component of HIV treatment regimens by 2025 with millions of people in need. Last month, the World Health Organization (WHO) added the drug to its list of Essential medicines (June 2017). However, ViiV’s access and pricing policy, based on greed and exorbitant profits, excludes many middle-income countries.
In 2014, ViiV signed a voluntary license agreement with the Medicines Patent Pool to allow generic production of the drug in, mainly, low-income countries: “Such a licence is a smokescreen that hides an aggressive market monopoly on key HIV high burden middle-income countries such as Thailand, China, Columbia, Khazakhstan, Algeria, Malaysia, Moldova, Peru and many others, where ViiV promised case-by-case flexible pricing that reveals today to be a real greed,” said Chalermsak Kittitrakul from AIDS Action Foundation in Thailand, a country left behind from the licence.
While generic manufacturers are now entering markets with a cost of $60 per person per year, which is expected to reduce even further to $40, the few examples of ‘discount’ prices offered by ViiV and made public include $1,003 in South Africa and $2,317 for Belarus.
“What’s significant is that even at $60 or less, the drug is still profitable. This shows just how excessive ViiV’s offered prices tags are,” says Othoman Mellouk, Intellectual Property and Access to Medicines lead at the International Treatment Preparedness Coalition (ITPC). “We should also keep in mind that these prices are for dolutegravir only, and the cost of the additional ARVs needed for a treatment regimen must be factored into the overall price of treatment.”
“The drug is important for millions of people living with HIV. ViiV needs to adjust to the new reality that dolutegravir is needed by all people living with HIV and not only those failing treatment. The drug should be affordable and accessible for everyone and quickly,” says Solange Baptiste, ITPC Executive Director.
Call to action for ViiV
The activists are calling on ViiV to reconsider the geographical coverage of its voluntary licence to ensure access to generic versions of the drug in all low and middle-income countries. Also to speed-up registration of dolutegravir in all countries and revise its pricing policy to adapt to the reality, and to be both quick and transparent about doing so.

Download the press release (PDF) here.
About ITPC
The International Treatment Preparedness Coalition (ITPC) is a worldwide coalition of people living with HIV and community advocates working to achieve universal access to optional HIV treatment of those in need. Formed in 2003 by a group of 125 HIV activists from 65 countries at a meeting in Cape Town, South Africa, ITPC actively advocates for treatment access in eight regions across the globe. ITPC believes that the fight for HIV treatment remains one of the most significant global social justice issues.
Media contacts:
Trisa Taro, ITPC Program Impact Manager
ttaro@itpcglobal.com
+1 909 720 0324

Additional info:
High quality photographs from the action will be made available for immediate use. These can be downloaded via the following link: http://bit.ly/2uVINzT . If you have any issues accessing photos or need information for captions, please contact Trisa Taro (listed above).
For more information on dolutegravir and other campaigns to ensure access to medicines, visit ITPC’s Make Medicines Affordable website.
The Roadmap Special Edition Report on Dolutegravir (DTG), published by I-MAK is available here: http://www.i-mak.org/roadmap/.  The aim is to equip stakeholders with current clinical, cost, and patent information to inform decision-making about the best strategies to expand currently limited access to DTG.  This report therefore expands on the information provided in the original Roadmap.
[1] http://journals.plos.org/plosone/article?id=10.1371/journal.pone.0164619