After 14 years of activism within the HIV treatment movement, ITPC Treatment Education Lead Bactrin Killingo is retiring.
Official as of September 1, 2017, Bactrin’s leaving marks the end of an era for ITPC. He was in attendance at the International Treatment Preparedness Summit in Cape Town, South Africa in 2003, where ITPC was founded, and has been a part of the organization ever since.

“It has been an honor being part of the movement. I have enjoyed advocating for various aspects of HIV treatment access over the years. It has been a joy watching ITPC become what it is today.”

ITPC has benefited from his innovative training style – which helped to pioneer the ITPC Advocacy for Community Treatment (ACT) Toolkit and the Community Demand Creation Model – and from his breadth of knowledge, which has been a source of inspiration to us all. 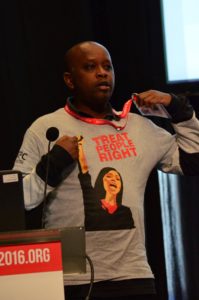 From both a regional and global perspective, Bactrin’s departure will be felt across all treatment access initiatives. In the last year alone, he led the development of three toolkits and conducted more than two dozen trainings and workshops in Asia, Africa, and Latin America and the Caribbean – building knowledge and creating demand for routine viral load testing, differentiated service delivery, and PrEP. He will be greatly missed by partners, allies and colleagues for his long-standing work with ITPC and as a respected global HIV treatment activist.
“Bactrin is one of the most respected names in HIV treatment education. Though he comes from a medical background, he can simplify all the technical jargon into a community language. That is how and where he stands apart from the rest. I am going to miss him. Jambo, my friend!” – Loon Gangte, ITPC South Asia Regional Coordinator.

“How I see it, this gives others the opportunity to take on the baton and keep the movement going. I have never had more confidence in the future of activism and the role ITPC will play in it.” 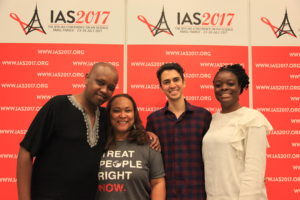 While together at IAS 2017 Paris, ITPC colleagues – including staff, board members, and founders – celebrated Bactrin’s retirement from active HIV treatment advocacy and expressed our appreciation for his years of service.
“Bactrin is a fearless advocate, a humble teacher, caring doctor and a lifelong friend. He will be sorely missed and be impossible to replace,” says ITPC Executive Director Solange Baptiste, who has worked closely with him since his start at ITPC, where he started as the Program Manager for Africa under the HIV Collaborative Fund.
“It’s hard to imagine ITPC without him. He’s been involved in so much of what we’ve accomplished over the last nearly fifteen years. But because of what he’s imparted to the team – to the organization as a whole – there’s no doubt that we will take his legacy forward.” – Gregg Gonsalves, ITPC Global Advisory Board Chair.
Bactrin will continue to be involved with ITPC in other ways and he looks forward to continued work in the treatment access movement. For now, the entire ITPC family wishes Bactrin well as he starts a new chapter in his life.

To our dearest Bactrin: Thank you. We are forever indebted to you for your vision and commitment to #TreatPeopleRight!