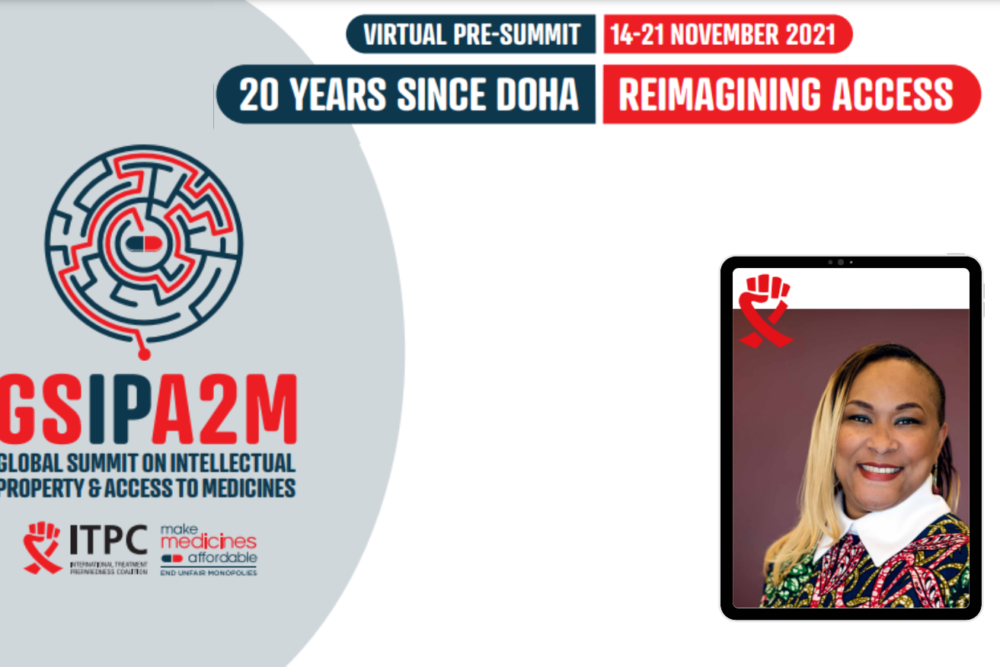 My words from the opening session of our Virtual Global Summit on Intellectual Property and Access to Medicines yesterday.

In March 2020, we realized we were headed towards another pandemic that would alter our lives in fundamental ways. More than a year later, we are still grappling with the fall-out from COVID-19, which has resulted in millions of deaths—directly or indirectly. Most of those deaths are uncounted and the lingering post-Covid health complications that will leave millions more in poor health remain mostly unacknowledged or underestimated. After the initial phase of the pandemic, we must ask whether it is now the virus or the deeply entrenched systems of power and inequality that are causing the continuing death and destruction.

The brightest hope to emerge from these two years of darkness was not the vaccines or the treatments. It was the strength and resilience of communities. As many of you witnessed in your networks and communities and even neighborhoods, we too saw the power of community up close and from the very beginning. ITPC’s Global Activist Network members mobilized to take care of people living with HIV in their local areas. Through the network, we were the eyes and ears on the ground. We documented disruptions to healthcare and medicines and alerted those in power to respond. We held regular virtual briefings to reach people living with HIV with essential information. We jumped headfirst into advocacy around fair vaccine access, building on our track record of working to make medicines affordable. Our members were afraid for their own health, but they still went outside their homes to deliver antiretrovirals to people who could not access them. HIV had already taught us about stigma, fear, and the necessity for courageous action.

And so, in this past year we have been witness to two visions of the future.

One envisions a world where might is right. No matter what words are spoken, promises made, solidarity pledged. Life-saving technologies are hoarded. Shipments diverted. Crumbs thrown to silence calls for accountability. A world where military responses to public health problems become acceptable and the crushing of human rights becomes rational and acceptable.

The second envisions a world where right makes might. Abandoned by governments, facing grotesque abuse of the control over health technologies by big pharma, communities across the world have come together to overcome their own fears and provide for each other, cook for each other, nurse one another back to health, to bury our dead, to grieve together, to forgive but not forget. And to fight back.

The rich can jet off to islands. Or blast into space in search of other planets to destroy. But we are here. We are together.

And what communities have always known is now more evident than ever—that we are in this together, that we are all the butterflies whose flapping wings cause storms in another part of the world. And we are bringing those storms to the front doors of those who are playing with our lives.

And it is in this spirit that I welcome you all on behalf the Make Medicines Affordable consortium and ITPC to this virtual edition of the Global Summit on Intellectual Property and Access to Medicines.

WOW – It has been a long journey since we met last time in Marrakesh in January 2018 for the 1st Summit on IP and Access to Medicines!

Since then, the world changed…and well…it also didn’t.

Our initial plans, like everyone else’s, to convene bi-annual gatherings were upended. We dithered between waiting for a situation where face to face meetings were once more possible…and ethical…

But there is too much that has happened in this area of work. And the anniversary of a moment when people’s power on the streets shook up far-off power structures was one we wanted to mark.

That is today, the 14th of November, when twenty years ago, in 2001, the Doha Declaration was signed.

So, with a lot of love and support from all of you, for accepting our very last-minute invitations to speak, for waking up too early or staying up too late to participate in the discussions, we have cobbled together this virtual Summit to mark 20 Years of the Doha Declaration. We hope to start conversations, set up pathways to work on difficult issues – many that we don’t agree on even amongst ourselves or that we are learning about for the first time – and build a pathway to a meeting next year where maybe we meet each other in person, hug each other, commiserate our losses and reimagine the world as only communities can.

For those not as familiar with us, ITPC was established within a few years of the signing of the Doha Declaration. Our organization was born out of spirited activist discussions about how to ensure access to treatment for the millions of people living with HIV in the global South and was set up in 2003 in South Africa.

The Make Medicines Affordable or MMA consortium is a coalition of civil society organizations from 17 countries (across 4 regions—Africa, Asia, Eastern Europe & Central Asia, and Latin America). Working together since 2015 to remove patent barriers for access to HIV, HCV, TB and more recently COVID-19 by supporting health and public interest-based law reform on intellectual property and the prevention of the adoption of TRIPS-plus provisions, and the use of TRIPS flexibilities such as patent oppositions and compulsory licenses.

Since the launch of our campaign, our national partners have filed 61 patent oppositions on key HIV, HCV, TB and potential COVID-19 medicines. Just during the past 18 months, in the midst of the pandemic, the consortium has filed 34 patent oppositions of which 10 were on COVID-19. We have also achieved successful law reforms in Argentina, Brazil, Russia and Ukraine.

In 2018, the first Global Summit on Intellectual Property and Access to Medicines (GSIPA2M) was organized as a return to Marrakesh to reflect, discuss and strategize on over two decades of the implementation of the TRIPS Agreement, its impact on health and access to medicines and to imagine and re-imagine what the next two decades of TRIPS implementation will (or could) bring. With the theme of “Pathways to Access,” the recognition, preservation and sustainability of the work of civil society was central to the discussions at the first GSIPA2M.

There was widespread agreement that the ‘system’ is broken, a system which has over-protected the rights of patent holders, a system that has made diseases like HIV hugely profitable, that results in “outrageous” prices and that drives research towards the highest profit and not the greatest need.

Much of what was discussed at the first GSIPA2M as trends, observation and analysis over the past two decades, of the adverse consequences of the implementation of the TRIPS Agreement, unfolded quickly and devastatingly in the span of less than two years.

Assurances by developed countries and big pharma that in the face of a pandemic, IP would not stand in the way of access crumbled to dust. As the world came to a standstill, governments – developed and developing – ploughed millions into pursuing diagnostics, treatments and vaccines. As products got approved, vaccines in particular, pledges of global solidarity were made. And broken. Real shortages gave way to artificial ones as big pharma created a stranglehold on the production and supply of medicines and vaccines; their power firmly anchored in the globalized patent rules of the TRIPS Agreement.

Far from the radical agenda for changing the system that the first GSIPA2M called for, the pandemic appears to have further entrenched the monopoly power of big pharma. Health budgets depleted by the pandemic will soon also have to cope with patented and exorbitantly priced treatments for non-Covid health conditions including HIV, TB and cancer.

All this as we come up to the 20-year anniversary of the Doha Declaration on the 14th of November 2021 which we are marking today. It was intended to free up the vice grip that pharmaceutical companies have over essential medicines and vaccines, provide new pathways for countries to produce their own affordable drugs, and save lives. The Doha Declaration was hailed as a victory. And it was. And yet, two decades on, corporate abuse of medical patents is more ingrained than ever.

What is happening with Covid is there for the world to see…as rich countries roll out boosters while most countries struggle to secure first doses. Under the current system, we’re at the mercy of big pharma, reliant on handouts or hoping for deals that may or may not ever arrive. When those deals come, they reflect the old entrenched market-based divide and conquer strategy. And our health is big business. Last week, Pfizer raised its revenues prediction for 2021 to $36 billion from sales of its COVID-19 vaccine and expects another $29 billion next year, as more booster jabs and vaccinations for children are greenlit in rich nations around the world.

The public is not unaware of this vast financial gain — over the last 18 months the media has closely charted the jostling of different private enterprises and vaccine-producers as they carve out their market share. A limp strategy of appeasement isn’t going to work forever. We can’t rely on the charity of mega-corporations when millions of lives hang in the balance.

Even as we fight and take on big pharma, we are all acutely aware that our battles are suddenly not in the silos we have become used to functioning in. Covid has turned the spotlight on big pharma in a way, that frankly, we never could. In the way that HIV did back in the late nineties. For the first time since the 2000s, we’ve seen the TRIPS Agreement and patent abuse repeatedly make headlines around the world. Since South Africa and India first called for a waiver over a year ago, more than 100 nations have publically thrown their weight behind it. The appetite for change is growing.

And donations, deals and distractions are not going to work any longer.

What has this little non-discriminating virus called COVID taught us? Well, that in the face of global problems, we still bring national solutions and find ways to put up barriers rooted in self-interest. We see our true global colors, back door deals, hoarding and greed. We must change the system to a better, reimagined playbook that is better for everyone. Reset the table for everyone and move to equality. The system is not broken, it was deliberately built this way. In fact, all the incentives in place are to keep it that way. We have to fight for a new and better one. We have a moment in history now to change it…

At no other point in the last three decades have we had this level of public awareness and momentum on our side for radical change. Even my mother…finally understands what I do on my job! This is the momentum we must use to forge together with other movements challenging systemic inequality and corporate power that are fighting for economic, social and ecological justice.

Hey guys….
To be overwhelmed.
To continue our deadly dance with big pharma.
To go back to the comfort of strategies we know so well. That have become our life’s work. Our careers. Our beliefs.
Do we have the courage to strike the blow? To re-think and re-imagine everything we know? Do we have the energy to continue our resistance? To reimagine our solidarities?

All that is much too much for a week of work via zoom!

But we hope that this Summit provides a platform and space to discuss all we have been thinking and feeling and discussing in our circles already.