ITPC conducts treatment education trainings, and creates and shares resources and tools needed to enable communities and treatment activists to work on the issues that impact their health.

Routine viral load testing (RVLT), which allows people to see if their HIV treatment is working, is an essential part of effective HIV treatment. Although many governments have committed to providing RVLT, in some countries it is frequently unavailable, unaffordable, or not routinely offered to people living with HIV.

In response to this, campaigns to demand that routine viral load testing is made available have been launched, including by ITPC and Médicins Sans Frontières. In October 2015, ITPC launched the Be Healthy – Know Your Viral Load campaign, in partnership with the AIDS and Rights Alliance for Southern Africa (ARASA). The ongoing campaign aims to inform people living with HIV about the value of viral load testing to mobilize people to demand routine viral load testing and to urge governments to make sure the tests are routinely available, accessible and affordable.

To learn more about RVLT and how to advocate for it, download our Activist Toolkit on RVLT available in English, French, Spanish and Portuguese.

Be Healthy – Know Your Viral Load was a campaign created in 2015 to increase awareness and demand for routine viral load testing in HIV treatment monitoring. 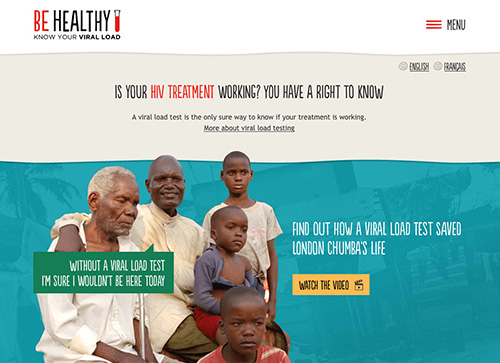 ITPC developed the original campaign website and materials, in partnership with AIDS & Rights Alliance for Southern Africa and partners throughout Africa, supported by the Robert Carr Fund. Additional support from Médecins Sans Frontières in 2016, allowed us to extend the campaign through regional workshops to activists from over thirty countries in three regions: Africa, Asia and Latin American and the Caribbean.

Although the campaign’s website is no longer active as a stand-alone resource, it has been consolidated with this website and ITPC continues to provide advocacy tools and resources on RVLT.

To learn more about RVLT and how to advocate for it, download our Activist Toolkit on RVLT available in English, French, Spanish and Portuguese.

Global HIV targets – like UNAIDS 90-90-90 and the WHO 2015 ‘Treat all’ recommendation – have led already overstretched health systems to re-examine how they provide HIV services. Meeting these challenges calls for modifying and expanding how, when, where and by whom HIV care and treatment are delivered. – this is known as differentiated service delivery

There is a need galvanize increased community demand for DSD from national governments. In response, ITPC and the AIDS and Rights Alliance for Southern Africa (ARASA) – in collaboration with the International AIDS Society (IAS) – are promoting a coordinated and strategic approach to PLHIV community advocacy for DSD. The objective of our work is to strengthen the capacity of civil society organizations to advocate nationally and regionally on differentiated models of care and ART delivery, through small grants advocacy and the development of informative resources and tools.

To learn more about differentiated service delivery and how you can advocate for it in your community, download What Works for Me: Activist Toolkit on Differentiated Service Delivery.