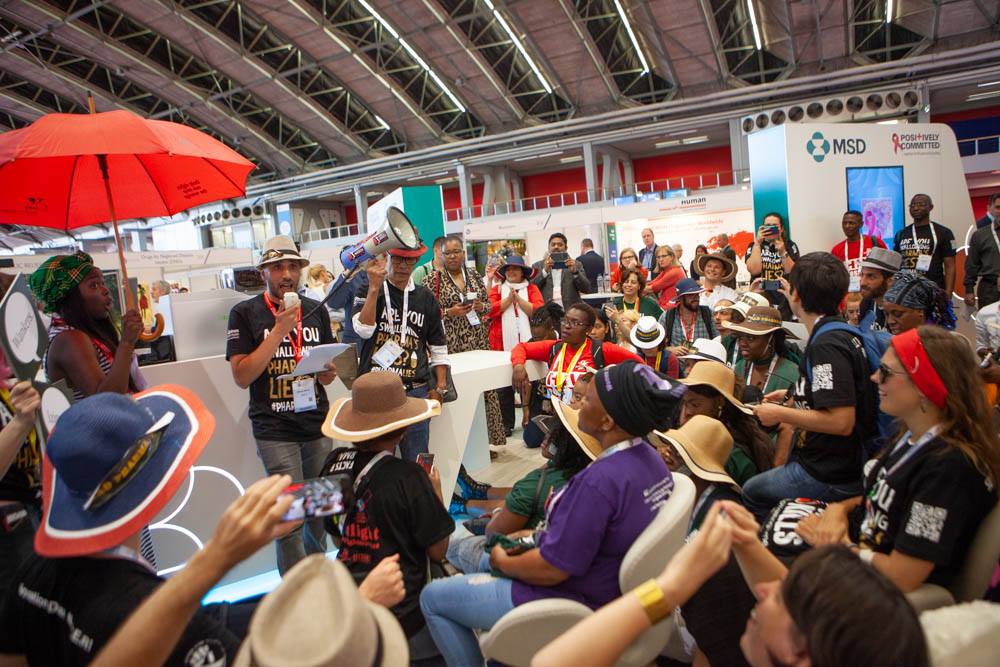 On 22-27 July 2018, ITPC was in Amsterdam in the Netherlands for the 2018 International AIDS Conference (AIDS 2018). With support from the Robert Carr Fund, Open Society Foundations, and Bridging the Gaps initiative, we were able to ensure treatment access issues were brought to the center of the conference.
Joined by activists from across the globe, here is what we did to ensure visibility and action on HIV treatment access:

“I am so glad to be sitting next to all of you. We need new blood. Because if we disappear, people will die.”

On Sunday, July 22nd, 250 activists from around the world gathered in Amsterdam for ITPC’s Community Activist Summit pre-conference event. The Summit provided an opportunity for the group to reflect on the state of activism today and how to address our most critical problems in new and innovative ways. Check out the three key outcomes of the Summit here!

“Forget the Amsterdam city tour, the BAD PHARMA TOUR is the best in town!”

Organizers of the Treatment Networking Zone guided activists on an informative walking tour through pharmaceutical stands exposing the truths behind Big Pharma’s lies! You can bet your @$ they had a good time! Tours were given daily! See more photos on the Make Medicines Affordable Facebook page!

“We say this over and over again… TREATMENT EDUCATION is the critical first step to creating demand. Including for differentiated service delivery.”

ITPC Executive Director Solange Baptiste explained home why treatment education remains central in the fight against HIV at the satellite session on differentiated service delivery (DSD) hosted by IAS and WHO on Monday morning. Learn more about our work on DSD!

“We are disappointed in our lack of decision making in regards to our treatment access!”

Activists demanded access to dolutegravir (DTG) for women across the world during the WHO satellite session introducing the new treatment guidelines and the role of DTG in first & second line treatment regimens. Learn more about the latest discussions around DTG.

“You know that saying ‘what you see is what you get’? That’s not the case with Big Pharma. Now we can see all the lies they’re hiding from everyone!”

“We are all going to build bridges this week. Don’t let your bridge be a bridge to no where!”

“If we are honest with ourselves, equity in access to optimal treatment is the elephant in the room.”

ITPC’s Wame Mosime co-moderated the highly anticipated session on safety of dolutegravir (DTG) in pregnancy which presented the late breaking findings, interpretations and implications for treatment access and programming. Get all the latest information from the panel’s presentations here!

Argentina is now classified as a HIGH INCOME COUNTRY. But we are facing an economic crisis that doesn’t prioritize buying ARVs or other medicines.”

Lorena di Giano of FGEP in Argentina spoke at ITPC’s press conference, Cutting Through the Noise at AIDS 2018, explaining how political agendas impact access to medicines, one of the major themes from the Community Activist Summit.

“We cannot talk about HIV without talking about TB. And if we’re really worried about saving lives, we cannot ignore TB drug resistance.”

“The best investment you can make is in communities. Full stop.”

“The time for action is now and without scaling up the prevention effort, the number of deaths in the Middle East and North Africa will rise!”

Communities are bringing data and monitoring what’s happening. This needs to be recognized and used by governments to fix their systems.”

Treatment activists discussed the transition to new ARVs during a session in the GNP+ networking zone. ITPCru’s Sergei Golovin shared insights from their recently launched report monitoring availability of ARVs in 7 countries in EECA. Read the full report here!

“You have the responsibility to invest in communities and stop paying lip service to it.”

ITPC’s Trisa Taro presented the key messages and outcomes from Sunday’s Community Activist Summit during the special session on pre-conference report backs. See all the special moments from the #ActivistSummit here!

“We need to stop thinking of prevention on one side and treatment on the other. We have to think through the entire continuum as one.”

ITPC’s Othoman Mellouk spoke on a session about the politics of PrEP reminding everyone that there is no ‘one size fits all’ approach. Learn more about our work around PrEP!

Let’s keep in mind that the benefits of data surveillance can have unintended consequences that impact the lives of communities.”

ITPC’s Solange Baptiste shared the community perspective at a special session on monitoring new ARVs hosted by WHO. The session focused on toxicity monitoring to inform treatment policies.