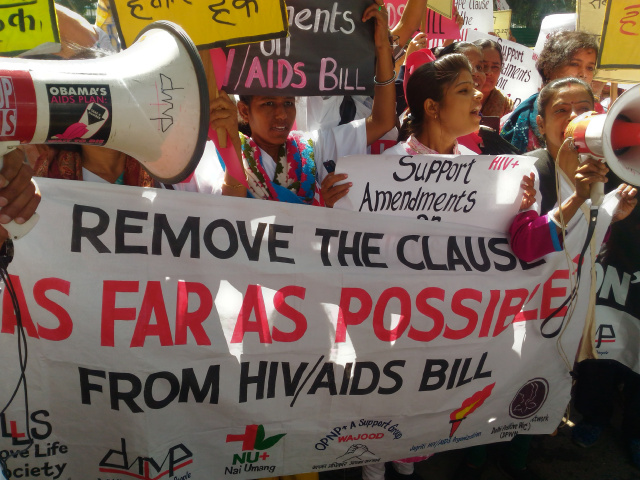 Delhi, Gaborone, New York – The International Treatment Preparedness Coalition (ITPC) and its global coalition partners are outraged following a decision by the Indian Parliament to absolve itself from responsibility of providing treatment for people living with HIV in India. The HIV/AIDS (Prevention & Control) Bill was passed in the upper house of the Indian Parliament yesterday, 21 March 2017. The Bill states that the government will provide treatment for people living with HIV ‘as far as possible’ (see full text below) absolving the government from its responsibility to protect the right to life.
“This is a step backwards for human rights, and a tremendous blow for all people living with HIV in India,” said Gregg Gonsalves, Chair of ITPC-Global. “It is extremely concerning that the India government has given itself this loophole at a time when the government program is in disarray, with the worst period of antiretroviral drug stock outs.”
Networks of people living with HIV and other civil society organizations lobbied Members of Parliament to amend the draft Bill that was first tabled in February 2014. In response to civil society concerns, senior Members of Parliament urged the Union Minister JP Nadda to make the amendment. HIV treatment activists were stunned when these parliamentarians withdrew their amendment at the last minute, thus giving way to the Bill passing into legislation.
“As the biggest supplier of generic medicines to the developing world, India could be the leading light in HIV treatment, an example to the rest of the world,” said Solange Baptiste, ITPC-Global’s Executive Director. “Instead this new Bill fails to enshrine the rights of its own people. I fear it’s an omen of things to come. We, HIV treatment activists, will be watching and monitoring to make sure the Indian government upholds its responsibility to all its citizens living with HIV.”
“Nothing in the world is more important than securing treatment for me, and my community of people living with HIV,” said Loon Gangte Regional Coordinator ITPC-South Asia. “I earnestly appeal to the government to delete the loophole ‘as far as possible’ and assure our right to life”.

HIV/AIDS Bill Final Text
The provision for HIV treatment in Section 14 of the HIV/AIDS Bill, reads as follows:
1. The measures to be taken by the Central Government or State Government under section 13 shall include the measure for providing, as far as possible, Anti-Retroviral and Opportunistic Infection Management to people living with HIV or AIDS.
2. The Central Government shall issue necessary guidelines in respect of protocols for HIV and AIDS relating to Anti-Retroviral Therapy and Opportunistic Infection Management which shall be applicable to all persons and shall ensure their wide dissemination.
About International Treatment Preparedness Coalition
International Treatment Preparedness Coalition (ITPC) is a global coalition of HIV treatment activists formed in 2003 to respond to the needs of communities worldwide. The global network is driven by individual activists, peer support groups, grassroots networks, community-based organizations, and non-governmental organizations. Each of our partners share our values and vision and come together to address issues around access to treatment issues in their countries, regions and at the global level.
For more information, please visit: www.itpcglobal.org.
For interviews contact: Loon Gangte, ITPC Regional Coordinator, South Asia +91-9871029514
Or Julia Powell jpowell@itpcglobal.com