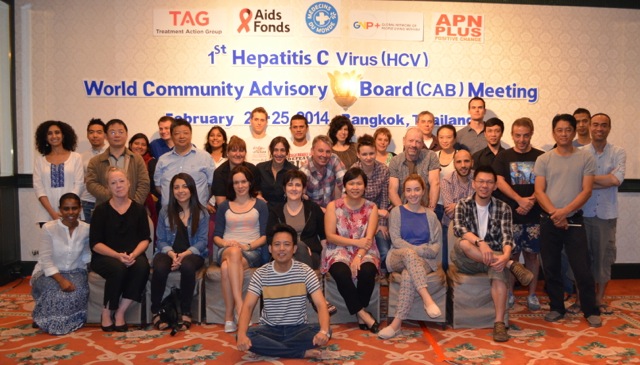 Forty activists and treatment advocates from around the world are in Bangkok from 22 to 25 February 2014 to attend the first World Community Advisory Board (CAB) meeting on Hepatitis C Virus (HCV) treatment. The participants will also meet with key pharmaceutical companies producing medicines to treat HCV. Members of ITPC’s Middle East & North Africa and Russia networks are participating in the meeting.
According to recent estimates, over 185 million people worldwide are infected with Hepatitis HCV, with up to 500,000 HCV-related deaths per year.
While there is treatment for Hepatitis C – including a new drug released in December 2013 that cures HCV – the vast majority of people with HCV remain untreated. Treatment rates range from 3.5% in Europe to 21% in the US. In low and middle-income countries, access to HCV treatment is extremely limited, mainly because the medicines are too expensive. For example, the cost of treatment with the most recently released medicine, Gilead’s sofosbuvir, is US $84,000 per patient for a regular 12-week course. Patients that have a hard-to-treat strain of the virus would need a 24-week course, bringing the price to $168,000.
At the World Cab, activists working to increase access to HCV medicine will share information and strategize together on how to address challenges preventing HCV treatment access including: intellectual property rights, HCV Direct Acting Agents (DAA), patent updates and regional experiences with pharmaceutical negotiations. They will also discuss specific challenges affecting people who inject drugs (PWID) and men who have sex with men (MSM).
From 24 – 25 February, the activists will meet with pharmaceutical representatives to share their concerns around treatment patents and pricing. Companies attending the meetings include: BMS, Abbvie, Jansen Merck, Roche, Gilead and Indian generic company Cadilla.
The meeting is organized by Treatment Action Group (TAG) with support from Asia Pacific Network of People Living with HIV/AIDS (APN+) and funded by TAG, the Open Society Foundation, the World Health Organization, Médecins du Monde, the Global Network of People living with HIV (GNP+) and AIDS Fonds.