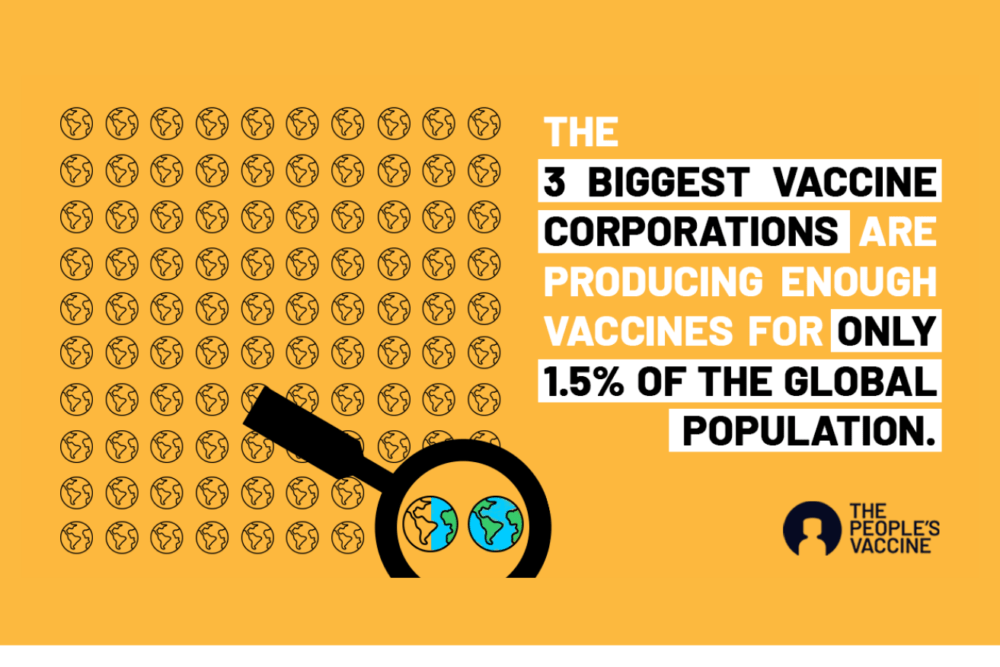 The supply of safe and effective vaccines for all is being artificially rationed because of the protection of exclusive rights and monopolies of pharmaceutical corporations, the People’s Vaccine Alliance said today.

The alliance warned that the three biggest vaccine companies in the world are largely sitting on the sidelines – they currently plan to produce enough COVID-19 vaccines for only 1.5 per cent of the global population in 2021. A number of other large manufacturers are not yet producing any of the successful, proven COVID-19 vaccines.

At the same time, the producers of approved vaccines, Pfizer/ BioNTech, Moderna and AstraZeneca, aim to produce enough doses to vaccinate around a third the global population. But because rich countries have bought multiple doses of these vaccines the actual figure of humanity covered is a lot less.  While Astra Zeneca has sold the majority of its doses to developing countries, Pfizer/ BioNTech and Moderna have sold almost all of their doses to rich nations, while failing to share their successful technology openly, despite huge public subsidies. Their vaccines are prohibitively expensive for many poor nations.

In the face of worldwide vaccine shortages and dramatic moves by the EU to restrict vaccine exports, the alliance, which includes the health NGO EMERGENCY, Frontline AIDS and Oxfam urged governments and the pharmaceutical industry to scale up production. It said they should remove the artificial barriers to tackling the global supply crisis, including by suspending intellectual property rules, sharing technology and ending monopoly control, so that everyone, everywhere has access to the vaccine as quickly as possible.

This week the Director General of the World Health Organisation, Dr Tedros Adhanom has said that sharing of technology and waiving of intellectual property will make vaccinating the world and controlling this disease possible.

Anna Marriott, Oxfam’s Health Policy Manager said: “The world is in a race to reach herd immunity to get this disease under control, save millions of lives and get our economy going again. This is a race we have to win before new mutations render our existing vaccines obsolete. Yet the pursuit of profits and monopolies means we are losing that race.

“People out there would be forgiven for thinking that every major vaccine company is working flat out to vaccinate the world, but this is simply not the case. We need every company on earth who can make safe and effective vaccines for COVID-19 to be making them right now. We urgently need to lift the veil of corporate secrecy and instead have open-source vaccines, mass produced by as many vaccine players as possible, including crucially those in developing countries.

“By refusing to share their technology and waive their intellectual property, companies like Moderna and Pfizer/BioNTech, are artificially rationing the supply of successful vaccines with the hopes of reaping huge financial rewards. This is despite both benefiting from huge public subsidy. This will cost lives and prolong the economic pain which is hitting the poorest hardest.”

The three biggest global vaccine producing pharmaceutical corporations by market value are GlaxoSmithKline (GSK), Merck and Sanofi and between them they have only pledged to produce 225 million vaccines this year. Earlier this week GSK announced that it will be working with CureVac to develop a vaccine to tackle emerging variants of COVID-19 next year and will help manufacture up to 100 million doses of CureVac’s vaccine which is still in clinical trials.

It is also likely that potential capacity in developing countries is being overlooked. The Serum Institute of India is already producing hundreds of millions of vaccines for COVID-19 on behalf of AstraZeneca and Novovax as well as developing their own, but there are at least 20 more vaccine manufacturers in India. Many other vaccine producers in developing and rich countries may already have or could quickly increase capacity to manufacture proven safe and effective vaccines if they had the know-how and intellectual property licenses. Globally, UNICEF data suggests just 43 per cent of reported COVID-19 vaccine production capacity is currently being used for the approved vaccines [2].

The People’s Vaccine Alliance is calling on US President Joe Biden and the governments of the UK and EU to use their emergency powers and to leverage their massive public funding to put pressure on Pfizer/ BioNTech, Astra Zeneca, Moderna and other subsequently successful vaccine producers, to openly share their vaccine science and technology, to waive their patents and insist that all other major vaccine producers get involved in production.  President Biden could use the Defense Production Act to help maximise the production of vaccines in the coming months.

Lois Chingandu, Director of Frontline AIDS, said: “Over $100 billion of taxpayers money has funded these vaccines, while the companies behind the three successful vaccine candidates are set to make over $30 billion in revenue this year alone.

“Public investments mean these are public goods, which should be used to benefit all humanity, not private property there to benefit shareholders. Leaders must act now to override this broken system of patents, monopolies and secrecy to deliver a People’s Vaccine for all.”

Moderna and Pfizer/BioNTech use mRNA technology, which potentially allows production to be rapidly scaled-up. Yet both companies are not committed to openly sharing their technology, leaving many potential producers on the sidelines.

The alliance is also calling on the US and other governments like Germany to invest in new production facilities especially in developing countries, in order to massively scale up the production of safe and effective vaccines and to build infrastructure that can respond better to future pandemics.

Heidi Chow, Senior Campaigns and Policy Manager at Global Justice Now, said: “Business as usual is not enough in a global pandemic. In times of war, manufacturers have often put aside normal competition to work together for a common cause. Surely governments should be insisting that the same spirit applies today, when so many people’s lives and livelihoods are at stake?”

The Peoples’ Vaccine Alliance is a coalition of global and national organizations and activists united under a common aim of campaigning for a ‘People’s Vaccine’. The call for a People’s Vaccine is backed by past and present world leaders, health experts, faith leaders and economists. For more information visit: https://peoplesvaccine.org

Global deaths from COVID-19 according to : https://ourworldindata.org/grapher/daily-covid-deaths-region?time=2020-01-23..latest

Due to corporate secrecy it is unclear how much spare capacity exists, but the world’s COVID vaccine production capacity could be significantly expanded if all companies that were able to join the manufacturing effort, including critically developing country producers. Evidence shows this need not take time. Sanofi’s announcement that it will be making Pfizer/BioNTech vaccines by July 2021 demonstrates that transferring the vaccine technology and scaling up production can happen in a matter of months. It took the German Pharma firm BioNTech just four and a half months to repurpose a new plant to scale up production of COVID-19 vaccines. The example also shows that previous vaccine experience is not a necessity in making mRNA vaccines, meaning that the net can be cast much wider in the search for additional expert capacity if the intellectual property and technology is shared.

[1] As of 4th February, Bloomberg’s global vaccine tracker reported a total of 108 million COVID-19 vaccine doses administered across 67 countries. Only 4.4 percent of vaccinations have been in developing countries, with 3.8 million of these vaccines being given in India. Of the poorest ‘low income’ countries, only 55 vaccines have been given in one country– Guinea. https://www.bloomberg.com/graphics/covid-vaccine-tracker-global-distribution/

We compare projected production capacity for all Covid-19 vaccine candidates with the capacity for those vaccines that are already approved.

According to several articles, Danish firm Bavarian Nordic has offered the use of a newly-operational factory, which It says could produce 240 million doses of Covid-19 vaccine per year: https://www.thelocal.dk/20210202/danish-company-offers-to-help-with-covid-19-vaccine-production