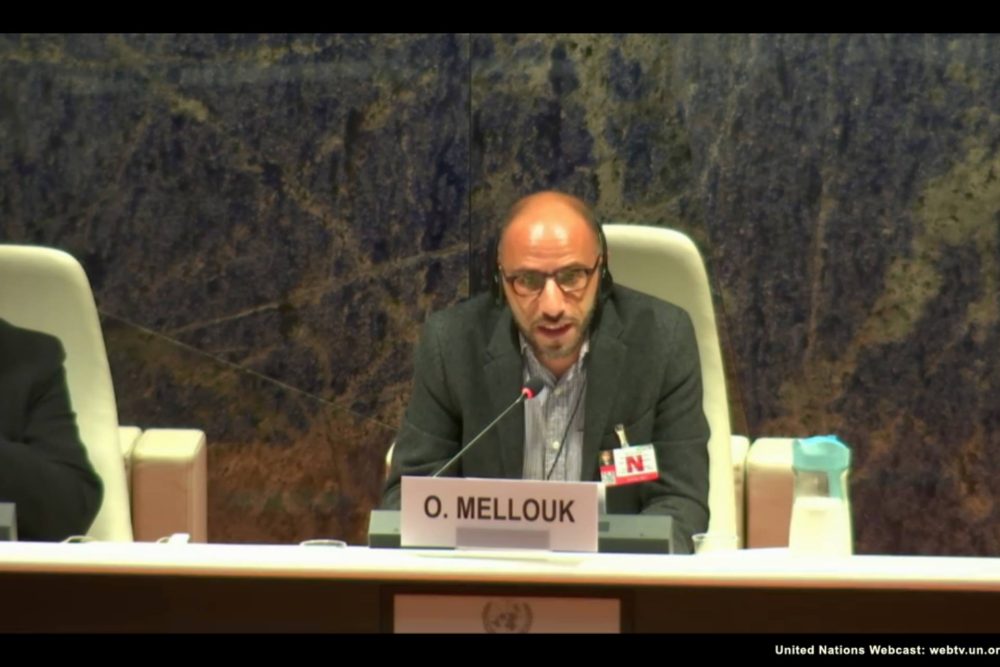 On Wednesday, October 4, 2017 ITPC Intellectual Property and Access to Medicines Lead Othoman Mellouk addressed the Human Rights Council’s 2017 Social Forum in Geneva, Switzerland, explaining why we can’t stand back while Big Pharma abuse the patent system at the expense of public health: 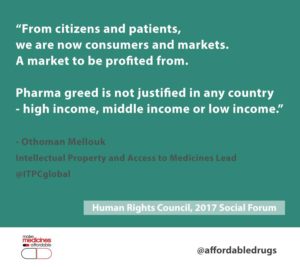 It is baffling that even with the involvement of UN and other international agencies the potential for affordable dolutegravir excludes key middle-income countries that are seeing an increase in HIV incidence.
In fact, by 2020, the vast majority of people living with HIV (87%) will be in high- and middle-income countries. Middle-income countries are home to almost half of the world’s population, and have a large and growing share of HIV infections (62%). They have even lower rates of antiretroviral treatment coverage than low-income countries. One third of people living in middle-income countries survives on less than US$2 per day. Almost 6 million people in middle-income countries (excluding sub-Saharan Africa) need antiretroviral treatment. However, less than a third are currently able to access it.
On 20 September, Malaysia’s Health Minister said enough to Gilead’s dangerous games by using their right under the TRIPS Agreement to issue a compulsory license. And we hope other countries will do the same or use other TRIPS flexibilities and use their rights as governments to turn principles into actions when faced with unjust patents and the abuse of patent monopolies. The path to Malaysia’s CL was paved of course by the determined hard work and actions of local CSOs who first presented a petition to the Health Ministry for a Compulsory Licence to be issued on sofosbuvir already in 2015.

Challenging the unethical, immoral and, I would argue, illegal actions of big pharma in keeping affordable generic medicines out of the hands of patients has become a critical part of the work of many CSOs and community-based groups. Even though we are no match for money, legal or lobbying muscle of big pharma, we challenge, often successfully their patents on key medicines in several middle-income countries:

What is interesting of course is that when community and public interest groups criticise companies for their divide and conquer policies on licenses or price discounts, the almost immediate response is that it is the governments that should be criticised instead. Companies will be companies of course. How can we expect that even in the area of life saving or life prolonging products that they should be driven by anything other than profit and PR. And governments after all, have full rights, like Malaysia within the WTO framework to get access to generic medicines. So as CSOs we are told we should direct our anger and our actions at the governments, not so much at the companies.
Right. So let us see what does happen when governments exercise these rights, when CSOs file legal interventions to challenge drug patents. In Brazil and Argentina, both countries also always excluded from voluntary licenses and price discounts, safeguards in their patent laws are designed to prevent unjustified patents and evergreening – the tactic used by big pharma to make small, obvious changes to older drugs so that they enjoy exclusive control of those drugs for far longer than 20 years. 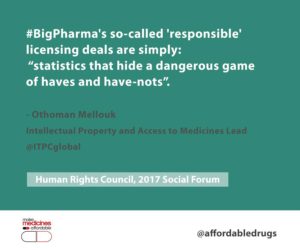 The laws of Brazil and Argentina prevent such unjustified patents from being granted and have been used successfully by local CSOs to challenge patents on HIV medicines. Of course both Brazil and Argentina are facing now legal challenges to these safeguards from big pharma. The lack of global condemnation of big pharma’s actions in Brazil and Argentina is extremely worrying. Local community based groups and CSOs like FGEP in Argentina and ABIA in Brazil are courageously fighting this legal nightmare but solidarity it seems is now also defined by World Bank classifications.
These legal challenges to public health safeguards in the patent laws of developing countries are backed up by threats of trade sanctions from developed countries like the United States which through its annual 301 report names and shames countries that do not grant US style patents to big pharma.
And to well and truly close the legal paths that governments have to access generic medicines by using TRIPS flexibilities, developed countries are engaged in a record number of trade negotiations with IP demands far in excess of the WTO or TRIPS-plus demands.
The EU is demanding data exclusivity, a whole new form of exclusivity on medicines in its free trade agreement negotiations with MERCUSOR which includes Brazil and Argentina, my country Morocco and our neighbors in Tunisia.
EFTA in their FTA negotiations with India are attempting to overturn or water down India’s critical evergreening safeguard that has kept key HIV, cancer, heart disease and other medicines off patent in the pharmacy of the developing world. The Trans-Pacific Partnership Agreement, that 11 countries are still trying to revive even without the US features some of the worst TRIPS-plus provisions ever seen in any FTAs. While Japan and South Korea are attempting to impose these provisions on three major generic producing countries – China, Thailand and India in the Regional Comprehensive Economic Partnership (RCEP) negotiations. 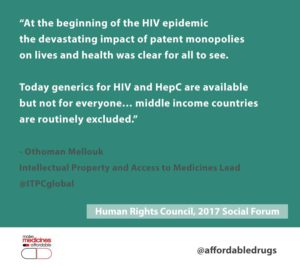 In all this, developed countries are ultimately acting by and on behalf of big pharma. So we respectfully disagree with those who believe our actions, advocacy and campaigns should only be directed at our governments. We do and will continue to hold our governments accountable. We will advocate and campaign against developed country FTAs that threaten global production in the South.
But our governments’ actions and inactions are strongly influenced and challenged by the enormous power of multinational pharma companies. The Right to Health requires that our governments, domestically and internationally protect, promote and fulfill this right, including access to medicines to all who need it. Instead, we see our governments now acting as negotiators and regulators.
From citizens and patients, we are now consumers and markets. A market to be profited from. A market to be divided. This has been inexorable pull and result of the WTO-world view that has strengthened the control of corporations on our medicines. An ongoing effort within the UN to draft a framework holding Transnational Corporations accountable for human rights violations is something that now deserves our attention if we are to ensure that the lives and health of people are no longer held hostage by the profits and PR of a company.
To turn principles into actions, we also need a stronger international and national rights framework for a paradigm shift; where solidarity and access to medicines is not dependent on a World Bank classification; pharma greed is not justified in any country – high income, middle income or low income.
Two days ago, the world celebrated the birthday of Mahatma Gandhi who taught us that Science without Humanity and Commerce without Morality are sins. I think it is appropriate to end with his words in the hope that it will remind us of a crucial principle that has been buried along with the right to health in debates about GDPs, percentages and statistics:
“I do not believe in the doctrine of the greatest good of the greatest number. The only real, dignified, human doctrine is the greatest good of all.”