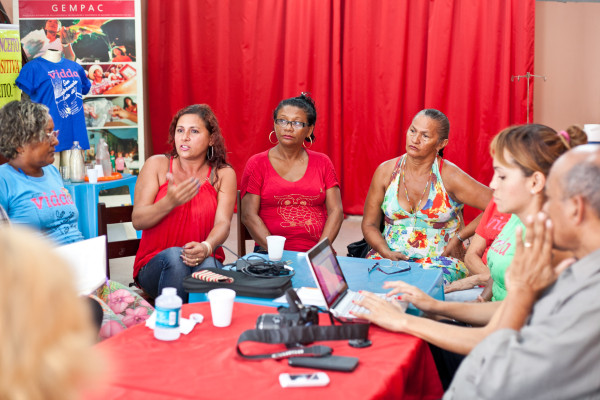 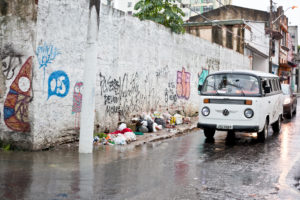 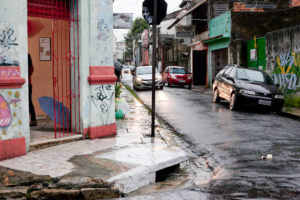 In the middle of this run-down neighbourhood in Belem, Brazil, we reach the community centre run by the Group of Women Prostitutes of the State of Para (GEMPAC), a colourful and warm room filled with an expectant and energetic group of about 15 women. As we settle down to start our discussions, somebody gets up to lock the bars in front of the doors! People passing in the street outside can still see us but there is now a visible barrier between the lively and colourful group inside and the community outside.

We are gathered here to discuss their work and, in particular, a small grant they have received from ITPC as part of the Bridging the Gaps programme. The discussions start with their very obvious passion for self organising as sex workers. One of their main concerns is the fact that women in sex work need to identify as sex workers because, as they say, “how will others accept us and respect us as professionals when we are not proudly calling ourselves sex workers?”. While the group we are talking to is making a very strong claim for the political space they need to occupy as sex workers, they admit not all sex workers share that vision and many find it difficult to counter the stigma and rejection they experience from the community. As part of their ITPC-funded project, which they called VIDDA (meaning “life” in Portuguese) they developed and administered a questionnaire within their community to better understand the obstacles that sex workers face when engaging with health services. Only 85 of the 115 women they interviewed self-identified as sex workers, which the group perceives as one of their main challenges.
About half the women we talk with on this hot and humid afternoon are living with HIV and all talk openly and emphatically about how important treatment and prevention education is for sex workers in their community. 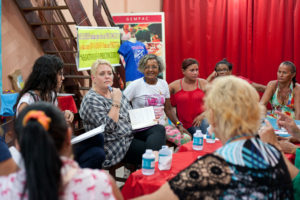 So here I am hearing from several women in the group about how they had tested positive many years ago, how they had initiated treatment and taken it for some time but had discontinued for a variety of reasons. Maria talks about the fact that after starting treatment she noticed that ARVs were changing her body, that she was gaining and losing weight in the ‘wrong’ places and that she started having problems with her body image. Her body is her capital for her work and she started feeling bad about her appearance so she stopped taking the medicine. Clara says she tested positive in 2000 and started on medication but she experienced memory loss and often could not remember whether she had taken her medicine and so she had to go through repeated treatment initiation which she found difficult to deal with. Paula talks about her particular issues as an indigenous person living with HIV  and working as a sex worker. She says the different levels of stigma and rejection led to her stop treatment. So many stories but all united in a couple of themes: here are women in a country with free ARVs and a comparatively well-resourced health system. They all started on medicines and they all discontinued because they had very little knowledge about their treatment, they could not access services that were taking into consideration their professional context and particular needs as sex workers and, in the end, the only reason they re-engaged with the treatment programme was because they were approached by their treatment knowledgable peers through the VIDDA project.
They are united in their understanding that the VIDDA project has actually saved lives because they have been able to develop communication materials which supported those women in the group who are openly living with HIV to talk to other sex workers about treatment, about side effects, about how to monitor your treatment and how to make decisions about your treatment. As Teresa says: ‘We are the doctors!’
And this is exactly what ITPC has been advocating for at global level for so many years: for treatment programmes to work in the long run, you need to support community-initiated and -run treatment education projects. And this is what donors and governments find so hard to understand which is why there is a growing lack of such programmes across the globe.
I am feeling a mix of excitement and frustration at the same time. Excitement about these incredibly energetic and motivated women who live in an environment that for me as an outsider feels incredibly violent and unsafe, presenting itself with a multitude of challenges but who are committed to treatment and prevention education in their community. Frustrated that as ITPC we can only make such a small contribution to treatment education in this community, which is so obviously the key for people to not fall off the treatment cascade that our friends in the global health agencies like to discuss in so many meetings. So we know what works, we have live evidence that it does (though maybe not through ‘randomised controlled trials’) yet it is so hard to get political and financial buy-in to do more of it. My short visit here has reconfirmed my strong belief that affected communities are the best advocates, not only for treatment access but also for treatment adherence and, ultimately, for sustainable programmes that initiate patients early enough and are able to keep them on treatment in the long run.
As we leave the warm and supportive atmosphere of the centre into the pouring Amazonian rain to get into Flora’s car, we are reminded of the tough neighbourhood these amazing women live in as we discover that the wipers of the car we had parked outside during our meeting have been stolen. Flora does not even blink an eyelid on this as we drive into the relentless rain; it’s the second time this week this has happened to her. Life goes on…..

GEMPAC is a self-organizing coalition of prostitutes and their supports working to empower women to overcome stigma, prejudice and the barriers that prevent access to optimal HIV treatment. Officially founded in May 1, 1990, GEMPAC has been around since 1987. A state-sanctioned non-profit NGO of Public Municipal Utility, the group has regional and national representatives, being a founding member of the Brazilian Network of Prostitutes (RBP). Internationally, it comprises part of the Global Network of Sex Work Projects (NSWP). Participative, social and political, GEMPAC has a permanent presence in decision-making spheres and social control, with representatives on forums, networks and relevant councils.